Mustang Sheers Off All The Wheel studs

Mustang Sheers Off All The Wheel studs

Traction is one of the most important factors in the sport of drag racing. It really ...

Traction is one of the most important factors in the sport of drag racing. It really doesn’t matter if you have 100 horsepower, 1,000 horsepower or 10,000 horsepower, without traction, you’re not going to lay down any impressive numbers. However, there are times when there’s a little too much traction, and our buddy Justin over at JMalcom2004 just happened to catch one of those instances.

Middle Georgia Motorsports Park in quickly becoming one of the hotbeds for grudge racing in the southeast. The management runs a tight ship, the staff keeps the place clean and looking professional, and the track itself is always on kill. These factors bring out some badass hotrods and teams looking to race at a place they know will always provide plenty of traction, especially no time grudge racers.

This video features a clean little matte black Mustang coupe laying down a trio of passes at MGMP, culminating with the run where we see what kind of problems too much traction can cause.

The first pass, there’s a little too little bite, causing the car to spin just off the line. It’s early in the day when this pass takes place and likely a combination of overly aggressive tuning on the Mustang and a little too much heat in the track. Things change drastically when the driver brings the little coupe back around for the second pass though.

The car bites hard on run number two, but pushes the front toward the centerline, causing the driver to have to lift. You can clearly see, this isn’t the car spinning, but actually biting so hard that the front tires aren’t able to steer the nose back toward the center of the groove.

The last pass, traction is at its max. The sun has gone down, which always causes the track to come around. The car bites so hard that it literally shears all ten studs off the ends of the axles, kicking the wheels out from under the car and dropping the car onto the track while the wheels and tires meander aimlessly.

It’s a sight to see, and proves that if you want to make sure your car is going to hook, MGMP is the place to be! Just make sure you’ve got some good hardware holding the wheels on!

I guess the track was really biting and the nitrous was hitting good because this bad boy broke ALL of the back wheel studs on both sides! 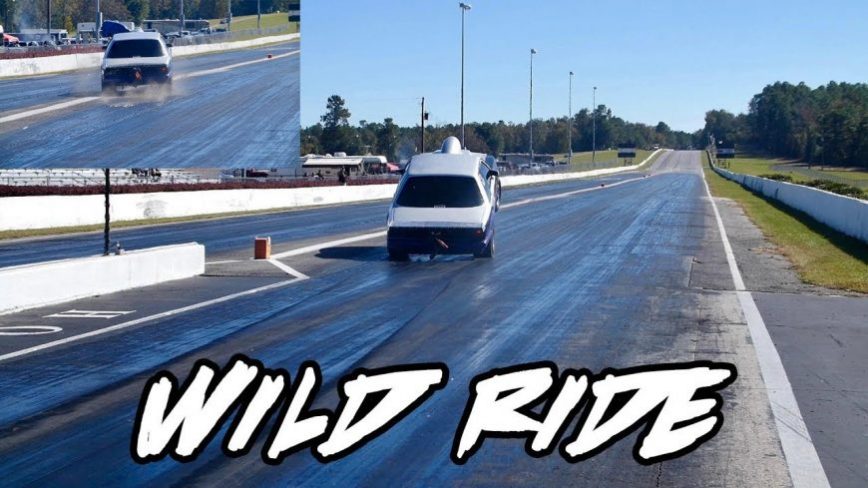