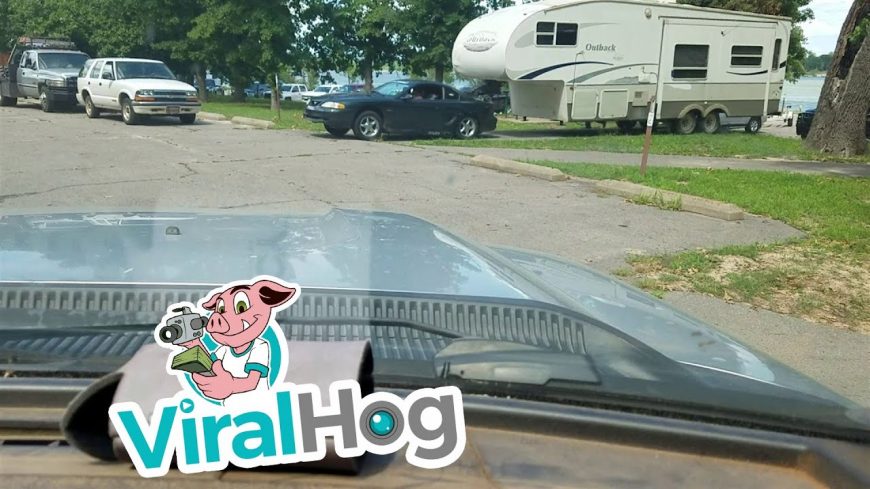 If it comes to doing the heavy lifting, when you’re picking out a vehicle, I think that it goes without saying that for these jobs, more likely than not you’re going to want to pick out a truck. Now, depending on if you’re pulling a trailer or would like more room for cargo to be sheltered, you might pick out an SUV or a pickup, however, one thing everything goes without saying is that no matter what, If you’re looking to do a lot of heavy lifting, you’re probably not going to pick up sports car. Nobody looks at a machine like a Ford Mustang and thinks “Wow this could probably get a lot of utility based tasks done.”

This time, however, while this vehicle may not have been the ideal candidate for pulling a camper that looks to be rather cumbersome in terms of mobile living quarters, it looks to do the job adequately as they hook up the Mustang to the home and have at it with a vengeance! As the car squats down as far as possible, it really seems like this machine is going to fail miserably at pulling the massive load, however, surprisingly, it really appears to come through with flying colors as the car has put together quite the entertaining video to be able to spectate.

Now, we wouldn’t necessarily recommend doing this for yourself, however, it is hard to argue with results. I bet that this is a story that, if there weren’t video attached to it, most people would probably have a hard time believing. I mean, even though there is video evidence that backs it all up, my brain is still having a little trouble processing that this really just went down. After seeing it with your own two eyes, be sure to tell us what you think of this interesting predicament that was pounded out with none other than a Mustang.