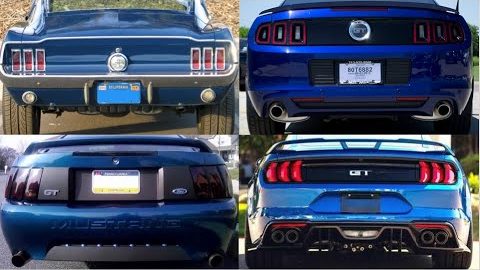 As we take a trip back through the ages, there are very few cars as iconic as the Ford Mustang. Whether or not someone is a fan of the model, it’s hard to deny the fact that it has one of the biggest support systems behind it. Over the years, models have come and gone. However, the Mustang seems to be one that constantly lives on as fans keep on eating up everything that Ford links to the name.

With that in mind, there have certainly been a lot of changes since the Mustang came out back in 1964.5. With every new technological development, the car has become more and more modern until it eventually has gotten to where we see it today.

Over the years, it could’ve been very reasonable to think that Ford could’ve gone in the wrong direction and lost their audience. Even though there have been a couple of slight missteps, Mustang fanatics are stronger now than ever.

So what is it that’s so great about the model that keeps fans coming back? Well, that’s all going to depend on the person who is absorbing the essence of the car. After all, as they say, beauty is truly in the eye of the beholder, especially with taste in cars.

I think that what most of us can agree upon, though, is that a nice sounding start up is an important part of American muscle. There’s just something about the car roaring to life and purring that exhaust note that really just makes it irresistible. This time, we get to hear a whole variety of startups from different Mustangs over the years.

While many features of these cars have stayed the same, we have to say that there are lots of different exhaust notes along the way through the evolution!