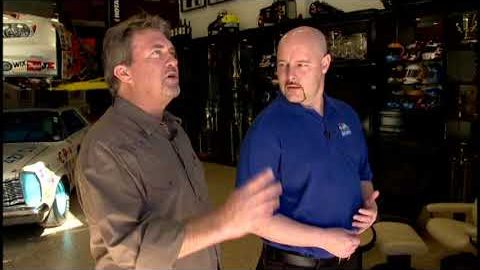 If there’s one thing that some of us can definitely struggle with, it’s collecting too many things beyond the amount of space that we have to store them. With that, there are a couple of options.

For one, we could kind of try to dial it down a little bit with the number of collectibles that we end up bringing home. For a NASCAR legend like Mike Skinner, we would probably be inclined to think that he has quite a few that he would like to hold onto. With that, he decided to take another route in building an entire area that was completely designed to be able to handle all of the collectibles that he wanted from parts to trophies and even a nice collection of rides.

While the concept of a man cave isn’t anything new, it’s very rare that we get to take a look inside the man cave of a legend. This time, that’s precisely what we get to do as Skinner opens up his doors.

From top to bottom, there’s a little bit of something to keep everybody interested here. From somewhere to entertain with the likes of a pool table all the way to some of the machines that Skinner made his money behind the wheel of, taking a tour of the space is almost adjacent to stepping foot in a museum and an arcade all at the same time. We might be inclined to say that many who enter probably never want to leave.

Following along with the video below, we get the unique experience to check out a car fanatic’s oasis. Seriously, there probably aren’t too many places on earth that are put together better than this when it comes to the perfect place for a car fan to hang out and spend a little bit of time.