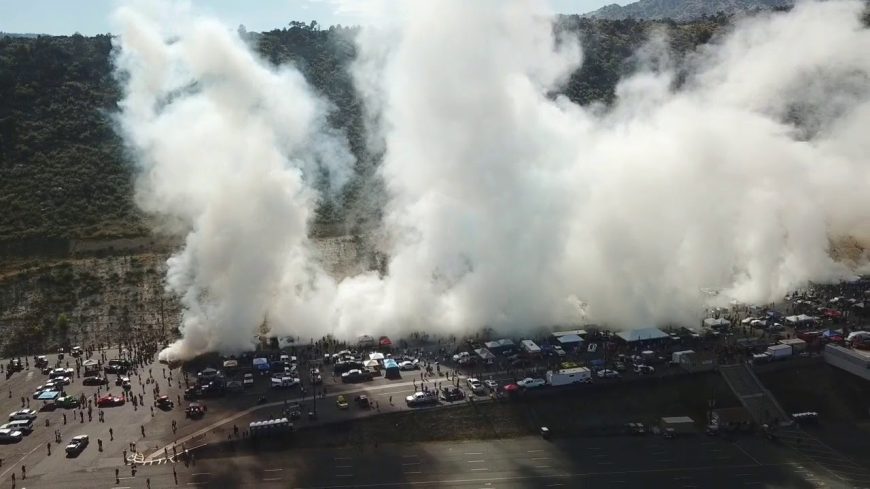 There is something about the sensation of doing a burnout that is ultra appealing. Inherently, it doesn’t make much sense. When we bring logic into the equation, burning off perfectly good rubber for no reason is nothing more than an unnecessary expense. However, when emotion is thrown into the mix, it makes way too much sense. The feeling of just being able to let a car rip for a little bit and create a little bit of smoke is something that is so so gratifying. It’s really one to make the hair on the back on one’s neck stand up.

This time, we check in from Bandimere Speedway in Colorado in order to see some people who definitely agree with that sentiment. In fact, 170 cars in total were on hand to head out and attempt to set the world record. The sky would slowly fill with smoke before eventually, it would appear as if there was a big cloud hovering over the race track. It certainly was something to behold as all of these cars worked in unison to make magic happen. Everyone on hand had to be having an absolute blast with it!

Nobody was on hand to confirm the record officially. However, watching this many machines smoke their tires all it once is still more than worth it. This had to take quite the amount of coordination and effort in order to bring this sideshow together. This might be one of the most gear headed records that we have ever seen. It really leads one to wonder just how far it will be taken. How long will be before 200 cars or more and up doing a simultaneous burnout? We certainly can’t wait to find out!

If you want to talk about freedom, then this is the display for you!

« Bernie Sanders Wants to Get Rid of All Long Haul Diesel Trucks, if Elected