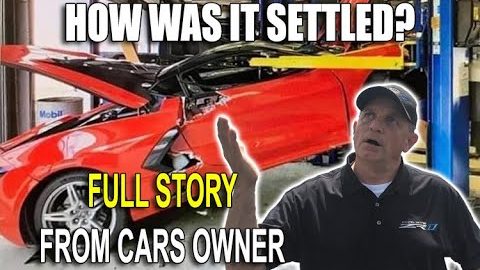 Let me paint a picture for you.

The news of the first-ever mid-engine Corvette comes out. Excited about the release, you decide to throw down your hard-earned money and take on the first model year of the next generation. You drive the car for a couple of hundred miles without a hitch but before you know it, a small issue arises.

This seems to be pretty much what happened to a guy named Jake who was featured on Rick Corvette Conti’s YouTube channel. Up until this point, everything was going as according to plan. I’m sure Jake could’ve gone without the issue that he figured to be a defective radiator fan bearing. However, something like this isn’t the end of the world and it seemed to be an issue that the dealer would be willing to remedy.

However, what came next was something that we’re sure made the Corvette owner’s heart jump into his throat. After dropping the car off and having it go through some diagnostics, he would eventually get a call that no car owner wants to hear. It’s probably especially painful knowing that you’re in possession of a car like this that’s not only exciting but also incredibly valuable with a market that seems to have spiked since the release.

As an observant reader would’ve probably deduced by now, the Corvette was dropped from a lift by the dealership. Something that had started out as a relatively manageable issue had evolved into something that’s sure to ruin at least a day if not more.

By following along with the video below, we get to hear the entire story from the owner’s mouth. One moment, he was in bliss with the C8, and the next, he was figuring out how he was going to get this situation handled with the dealer. How would everything be settled? Grab your popcorn because it’s storytime.