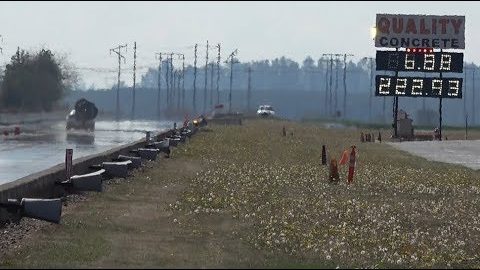 This video got my attention from the opening few seconds because the Extreme Turbo Systems GTR was actually driven to the staging lanes instead of being towed to the line, just a little something that shows this car isn’t a full-on drag car, although the numbers it puts up are certainly on the level of some of the quickest racecars on the planet.

The first pass is somewhat of a shakedown run, with the rear wheel drive-only GTR running “just” a 7.29 elapsed time at 187 MPH. As quick as that is – and for those who don’t know, anything quicker than 8 seconds in the quarter mile is pretty dang impressive. However, these guys are just getting warmed up with this pass.

The driver brings the car back around for another shot with the boost cranked up to levels they’ve never run before and unleashes a new GTR world record elapsed time of 6.91 at a ridiculous 195 MPH. The numbers are even more impressive considering the car is skating around all over the track for the full length of the pass.

You can see from the in-car camera that the driver had to work his butt off to keep the car off the wall and from crossing the centerline.

Giving the track a little time to warm up and provide better traction, the team risks losing the nice cool air, but hopefully give the driver a safer surface to race on. They send the car down one more time and light up the boards with some truly astonishing numbers. The ET in only slightly quicker at 6.88 seconds, likely due to the warmer air temps. However, going through the finish line with the car hooked up and at wide open throttle meant the speed was massive, an otherworldly 222 MPH, handing ETS both ends of the GTR quarter mile world record.