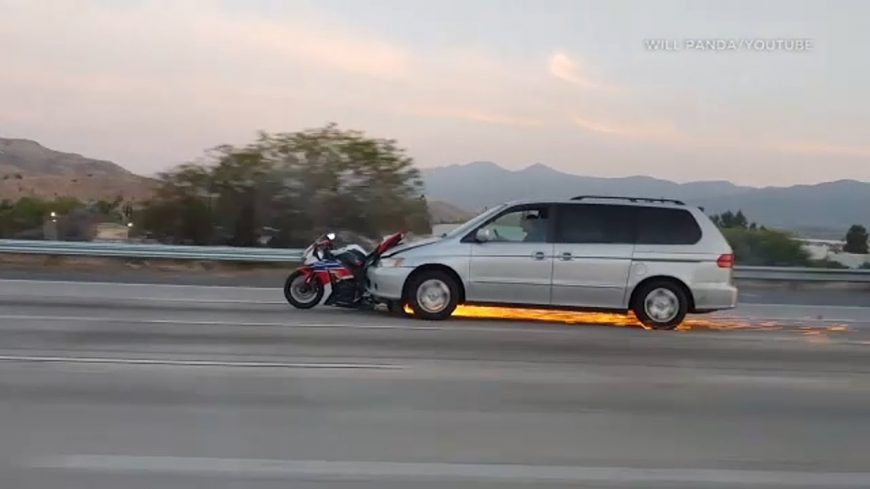 We have all been in the driving situations where we might’ve been doing something that makes us look stupid. For example, many are familiar with that little feeling inside of embarrassment upon realizing that their blinker has been on for the last 5 miles. However, imagine that amplified feeling if the blinker was replaced with a motorcycle dragging underneath of your vehicle.

For one motorist in Corona, California, that was exactly the case. The video has been going viral as a minivan roars down the highway with a motorcycle stuck under the front bumper. With sparks flying everywhere, the driver doesn’t seem like he’s ready to stop anytime soon.

There is no motorcycle rider insight which naturally leads us to wonder what happened to the poor guy riding the bike. Fortunately, we do learn that he didn’t sustain any serious injuries. His bike on the other hand looks like it’s probably going to be totaled. After a ride like that, we’re a little surprised that it held together as well as it did.

Later on, the motorcycle would be found thrashed and left on the side of the road. The minivan, on the other hand, was later found abandoned. Just when we thought that we had seen it all, a video like this pops up and really makes us question things a little bit. Clearly, the driver behind the wheel of the minivan didn’t want to be seen. This really begs the question of why he would continue driving down the freeway with the motorcycle under the front of the vehicle.

Down below, ABC7 takes the liberty of breaking it all down and taking us to the scene from that day. We’re willing to bet that the person behind the camera and other motorists probably never expected this to be the scene that they would witness when leaving the house that day.

« Sub Arc Welding – Ever See Welding Like This Before?