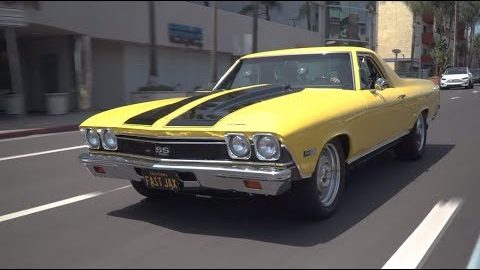 When someone makes their living by going fast, it makes us wonder what exactly they drive on their commute. After all, if an NHRA Funny Car champion is hurling down the strip at hundreds of miles per hour, could anything be interesting after that? Could even the most aggressive of streetcars give such a driver a thrill to get behind the wheel of? It almost seems like every other car would pale in comparison after competing in a funny car.

For NHRA funny car champion, Jack Beckman, we get to find out exactly what his preferences are off of the track. As it turns out, Jack keeps it pretty simple. The car that he drives around in is a clean muscle machine that certainly has some get up and go. We wouldn’t say it’s the fastest thing on the streets but it’s also something that will hold its own.

The vehicle is an old school Chevrolet El Camino SS. The car was Jack’s first and has definitely seen some modifications since he has owned it. In this one, Jack recalls his days with the machine. Just like anybody else, he has had some frustration in hot rodding it. He has also appreciated the journey with the car to get to where it is today. After going through his paces with a blown up engine and different combinations, it seems like Jack really appreciates where the El Camino sits these days.

By following along with the video below, we get an inside look at quite an interesting situation. This really does answer the question of how these high-intensity drivers on the track enjoy their time driving off of the track. This El Camino certainly fits the bill as a cool ride to spend some time in on the streets!