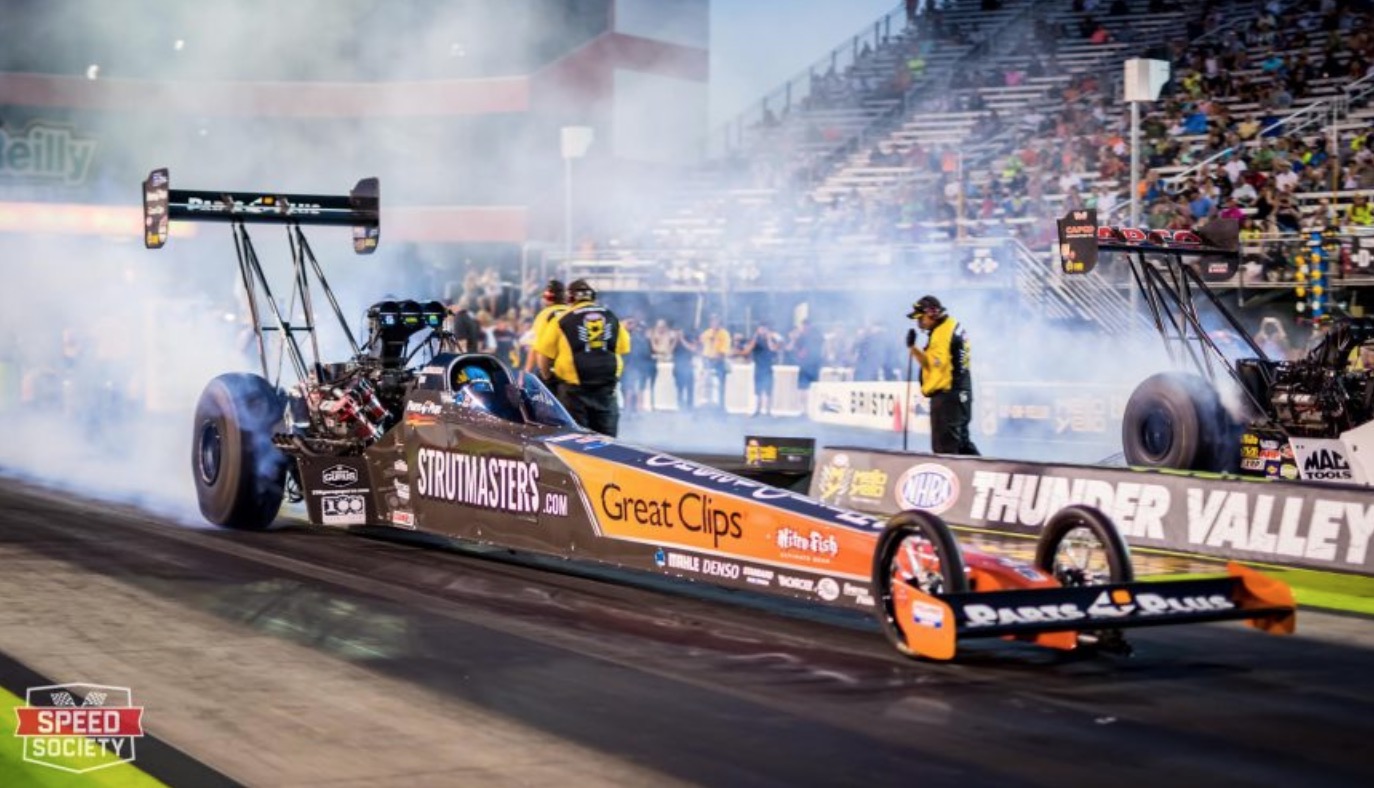 After taking a weekend off to catch their collective breath, the stars of the NHRA tour kick off the grueling but exciting Western Swing this weekend at the Dodge Mile High Nationals. Held annually at Bandimere Speedway just outside Denver, the elevation plays havoc for tuners looking to extract as much horsepower as possible from the thin Rocky Mountain air. The race is hard on parts, but always treats fans to some world class side-by-side competition.

Defending event winner Antron Brown is looking to return to his winning ways in Denver after coming up just short at the last stop on tour. Brown raced to the finals in Epping, NH at the New England Nationals, but his good friend Steve Torrence ended up in the winner’s circle. It’s no secret that 2018 started slowly for the Matco Tools team, but they’ve shown promise lately with more consistent round wins. Having been to the finals the past 2 years, Brown knows what it takes to get it done in Denver, saying “Denver is different than any other place we race. You’re a mile high, so the air is thin and there’s not much oxygen. The temperatures will go up during the day and that makes some difficult conditions for the race cars to make good power and run hard there.”

Brown’s DSR teammate Leah Pritchett will unveil a new-look wrap to coincide with the release of Dodge’s new  Challenger R/T Scat Pack 1320 Edition and hopes to take a step past Brown, who not only took her out at in the semifinals at Epping, but also stopped her in the finals at this event in 2017. As the representative of the event’s presenting sponsor, Pritchett would love to take home the win for Dodge and the massive effort they put into making the Mile High’s one of the most fan-friendly events on tour. “I always say, if there’s one race for a fan to attend on a bucket list, this is it, Mopar always brings the best fan experience starting with the Thursday-night block party to the midways at the track, and these Mopar teams are ready to bring them the best racing.”

Also in Top Fuel, Clay Millican is looking to resume his winning ways from earlier in the season as the tour heads west. Millican, who won back to back races for the first time in his 20 year career this season, and crew chief David Grubnic have been consistently quick all year, racking up #1 qualifiers at nearly half of the events so far and doubling up on their win total form last year. The Mountain always presents tuners with a challenge, but look for veteran Grubnic to put his Aussie magic – and those trademark orange flames – to work for the Great Clips/Parts Plus/Strutmasters car.

In Funny Car, Ron Capps will be looking to tuner Rahn Tobler’s decades of experience to tune his NAPA Dodge Charger to tame the tricky conditions and put their team back in the winner’s circle. Capps won just a few weeks ago in Bristol in pretty tricky conditions, managing to go down the track consistently in the sweltering Tennessee heat, so that may have been a preview of what’s to come in Denver. “Rahn Tobler and our NAPA AUTO PARTS team has worked very hard with Dodge and Pennzoil to bring the best race car we can bring to the Dodge Mile-High Nationals. To have success in the conditions that we see at (the high) altitude in Denver, you need to have an old-school savvy crew chief. I brag about Rahn Tobler over and over again, but the NAPA Know How that he has both near sea-level conditions as well as mile-high conditions, means that we’re always in the hunt for a win on any given NHRA weekend.”

Jonnie Lindberg will be looking once again for consistency from his Head Racing team. Longtime driver, tuner and team owner Jim Head has tuned the car to some solid numbers all season, only to run into some of the worst luck on raceday. Between smoking the tires at the worst possible time and running into the one car quicker than them the entire round, Lindberg and Company have just been cursed so far this season. However, with the numbers that they’ve managed to put up, a little consistency is all that this team needs to go rounds and put Jonnie in a position to take his first win in the nitro ranks.

Speaking of cursed, Alex Laughlin has literally invented ways to lose in Pro Stock this season. Laughlin has qualified well at most of the events this season, giving him lane choice going into eliminations against cars that qualified slower than him. However, between untimely redlights, the car making unexpected moves down track, and seeing his competition put together “Where did THAT come from?!” passes, Laughlin has found himself watching the second round from the stands at every event since racing to the semifinals in Phoenix, the second race of the season. Laughlin has had no problem putting up competitive numbers all season, his Fitzgerald USA Camaro also needs the benefit of consistency to go rounds, as does Alex himself. As we’ve said before, if he and the car both show up on the same weekend, there’s nothing keeping Laughlin from running up front and winning races.

As always, you can catch all the action live in real-time on the NHRA’s All Access feature, found on NHRA.com. Fox Sports will also bring the action straight into your living room on FS1 starting on Saturday from 7:30 to 10:00 pm ET with Saturday Nitro Live, and live eliminations on Sunday starting at 3:00 pm ET.

« Guy Takes Girl on a Date, Steals Her Car For Another Date