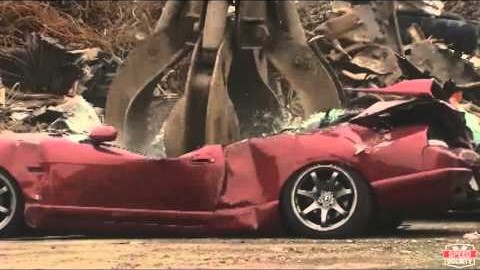 Each of us have that one car that we want, but never seems to be in reach. For some it is a ’71 HEMI ‘Cuda, Ferrari F40, 22B STi, and the list goes on. For Billy Crider, that car was a Nissan Skyline. After a drunk driver hit him and he got a settlement, he decided to go for it and buy one. Four months ago, he located a 1995 R33 Skyline at Bullet Motorsports in Fort Lauderdale, FL and purchased his dream car.

When he got the car, he had it inspected and titled as a Nissan Skyline with no issues. When he called the insurance company, they simply insured it as a Nissan Skyline, no questions asked. He drove the car and enjoyed it, but about a month and a half ago one of his friends backed into it on accident. When the insurance adjuster from State Farm showed up, he saw the 11-digit VIN number and flagged it. About a week after that, the Feds show up to his door and take the car from him to be crushed.

These cars were not tested to the standards that the U.S. requires, so it was federally illegal to have the car. Billy didn’t want to see his car go, but there was nothing he could do. With a Civil Forfeiture of Property, they took the car and crushed it about a month ago. A local news source contact Billy with the video of his car being crushed and gave him the rights to do with it what he wanted. Check out the video under the article of the mint R33 being destroyed.

One thing that Billy made sure to do while he owned his R33 is to share it with others. Every time somebody would ask to take pictures of it or sit in it, he’d throw them the keys and let them take it around the block and wear the RB25 out. Although it was fairly stock with just an aftermarket exhaust, everybody loved the car.

“I’ve probably let 200 people drive that car.” Billy told me. “It made a lot of people happy and that makes it kind of worth it. A lot of them got more joy out of it than I did just by driving it one time.”

Sharing the experience with others is what the car culture is about. I don’t know many people who have the guts to just throw their keys to a stranger and let them drive their car, but Billy said they always came back. He was even stopped by multiple cops who just wanted to see the Skyline. A few of them even asked to take pictures in the car. When they checked his plates, everything looked good so they let him go on.

Billy didn’t know that he was doing anything wrong. He just bought his dream car and drove the heck out of it. Unfortunately, the government can’t find any better way to spend tax dollars than crushing perfectly fine cars and costing people like Billy tens of thousands of dollars. He even said that the officers who came to pick the car up felt bad about taking it because it was such a clean example.

As R32’s pass the 25 year mark, they can begin to be imported into the states, but the R33 is a few years out. The only model’s that can be brought into the states are the 1996-1998 Skyline’s because they were crash tested. You have to put legal glass in them and reinforce the A-pillar, but when you do so the registered importers office will reassign it a 17-digit VIN number and certify it as legal.

Check out this video of the car being crushed. Hopefully Billy can get another car in the future, but with the $20k loss of the car it may be awhile.