Nitrous Diesel Goes Up in Flames on Dyno, Runs Away!

by Jesse Kleib | May 15, 2019
dieselexplosiontrucks

Nitrous Diesel Goes Up in Flames on Dyno, Runs Away!

When it comes to diesel performance, one of the biggest events of the year seems to ...

When it comes to diesel performance, one of the biggest events of the year seems to be the Ultimate Callout Challenge. In this event, there are all sorts of competitive ways to unleash your inner dinner diesel freak. Perhaps, one of the biggest draws of the weekend is the dyno challenge. In the world of diesel performance, it seems like bragging rights can really live or die by the amount of horsepower that a truck is able to put down on the rollers. However, in the pursuit of big power, sometimes, things can just so happen to get a little bit messy up there.

This time, we join in with the 2019 rendition of the Ultimate Callout Challenge. It appears as if this Duramax powered Chevrolet Silverado, had the dial cranked up just a little bit too much. As the nitrous infused truck began to accelerate on the dyno, the owner might’ve thought that everything was going as according to plan. However, that plan would be torn to shreds. Instead, things would take a turn for the worse as the truck would explode into a massive ball of flames. This isn’t where it would stop, either. Instead, the engine would keep on revving out of control!

Before long, it would appear as if the staff on hand was able to successfully get out of the runaway tamed. It doesn’t appear as if anybody was injured in the incident. This seems quite lucky given the magnitude of the explosion. It’s surely unfortunate that the truck had to go through such catastrophic failure.

The DHD machine is rumored to have been put back together rather quickly, though. The video uploader tells us that the truck was reconstructed overnight for the next event. That’s just the name of the game sometimes when making that much steam! 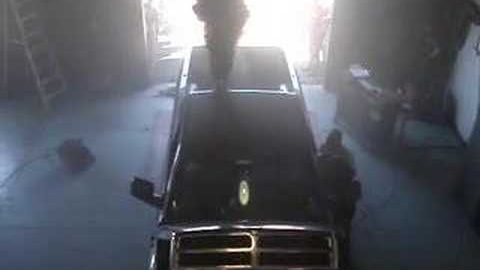