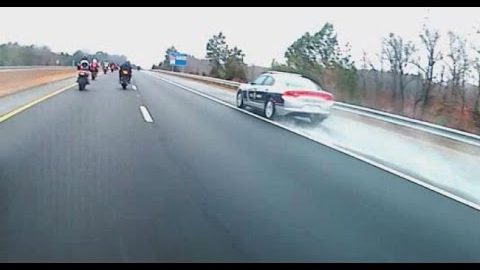 When it comes to the way that police officers head out to responded to a call, there is definitely a happy medium somewhere to be had. In one hand, you most certainly want to make sure you get to the scene of an emergency in time as to properly do your job but on the other hand, speeding there recklessly might not be the best idea as you could do as much harm as the potential to do good. This isn’t necessarily to say that every officer breaking the speed limit is making a bad call because there are definitely certain situations where the risk is way lower than the possible reward of getting to the scene and saving somebody’s life but sometimes, you just have to scratch her head and wonder what was going through theirs.

In this situation, we have an out of context video clip that could just so happen raise a lot of concerns. As these motorcycle riders were heading down the highway together, they caught something pretty wild on camera that might just have you wondering what this police officer was up to. The crime or emergency on the other end of this officer’s commute must’ve been important because as these riders traveled at what appears to be something similar to the flow of traffic or the speed limit out on the highway, the police cruiser simply flies right past them in the shoulder without any emergency lighting, almost like they’re standing still.

You can check out the video clip for yourself as we know that some people will be here screaming that the officer should be held accountable for his speed that could be perceived to be a little bit above reasonable here and others will be claiming that the officer probably was on his way to an emergency and should be left alone. After checking out the video for yourself, be sure to sound off on what you think of this situation as it unfolds right in front of our eyes, even though it might not be easy to believe.