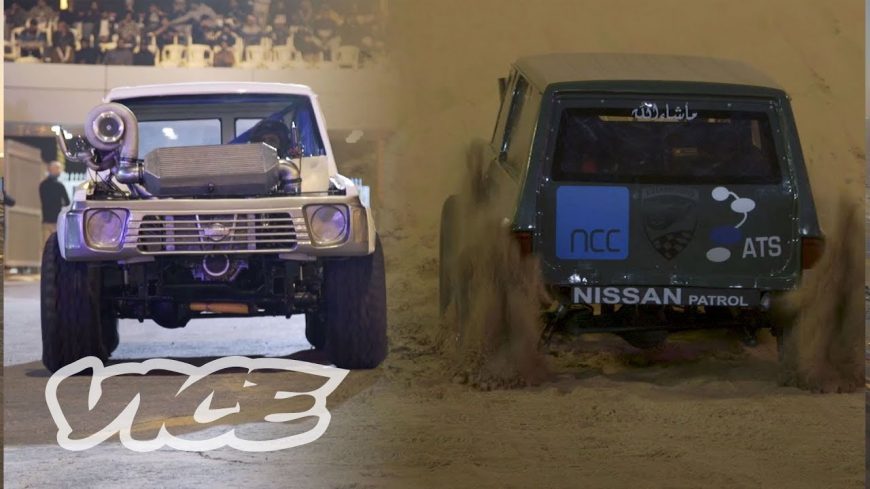 The Hill Of Horrors is very well known all around the world. The hill itself looks daunting in this footage, but you just can’t really grasp the height and the angle of the massive Tal Moreeb dune until you see some of the angles showing it from the base looking upward towards the top. At fifty degrees, it’s imposing to say the least.

VICE followed Nasser, a self-financed offroad enthusiast who competes for bragging rights and pride, not the prize money, which is small compared to the massive investment these competitors make in their buggies. Nasser and the rest of the Gulf region’s top offroad racers spend nine days at the Liwa Sports Festival competing in a host of events, including sand drag racing and of course, the intense Hill of Horrors hillclimb.

Nasser hits the sand drags in his wicked Red Bull-emblazoned buggy to try to not only throw down the quickest elapsed time of the event, but to break the record set by his buddy and fellow competitor. After a couple of laps, Nasser takes first place but you can hear the engine in his buggy is misfiring and not putting down all the power it should. On his final attempt, the bugs seem to be sorted out and he throws down a new record, establishing himself as the man to beat for the time being.

After the drag racing has completed, it’s time for the feature event, the hill climb. Night falls on the dunes and the festivities get underway. We going another racers, Saeed, who is hoping to take a win after finishing second and third in the past. His GTR powered Nissan Patrol sounds like it’s up to the task, but runs into an issue shortly into the run that leaves him well short of completing the run.

He’s entered in another class, but I’m going to leave that for you guys to find out by hitting the play button and watching for yourself. VICE puts together some amazing pieces, and this one is well worth the watch. Check it out and see if Saeed can take the win!

« Number #3300: The Last Demon to be Auctioned for Charity