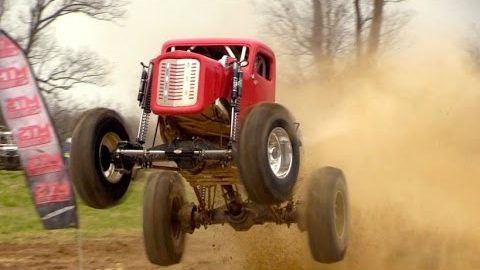 When you think about the way that mega trucks operate, it really is an amazing feat to behold. Watching something that big will its way around with seemingly unlimited horsepower is something that you have to see to believe. These things are pushed way further and harder than you ever thought you would see anything that big being pushed.

This time, it’s Barry Thompson behind the wheel and according to YouTuber, MadRam11, Barry has one of the baddest built mega trucks around and in this display, it isn’t too hard to see why he’s come out with that theory, putting this thing up on a pedestal with such high acclaim.

In this one, we get to watch the machine as it roars around in the mud at American Rebel Mud Park, breaking in the surface as one of the first to ever do so with this park’s inaugural opening. It really does look like this place has a lot of potential, even from the initial high flying antics that we see from this mega truck.

Check out the video download that will give you some insight on exactly what it is that makes everyone stop and stare when they see this beast of a machine ripping up the mud as hard as it possibly can. Be sure to tell us what you think of such a massive truck going at the elements this hard.