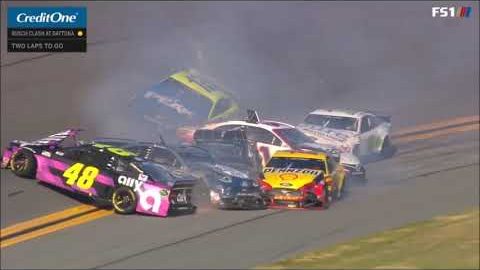 We would be inclined to think that most racing fans know about the Daytona 500. It is one of the biggest events in all of motorsports history. A lesser-known event happens the weekend before in the Busch Clash at Daytona. We think that the title was rather appropriate as basically nobody finished the race unscathed this year. If the car that won was a regular vehicle on the streets, it probably would’ve been deemed totaled by an insurance company.

A Race With Little meaning

As the schedule is laid out, The Clash is actually an exhibition race. That means that at the end of the year, there aren’t really any points allotted to racers. So, why even race in the first place? Sure, we all love to go fast but that’s a lot of money on the line to operate a race team. That doesn’t even consider potential damage. As we saw, just about everyone in the competition was going to have to deal with costly repairs. So, why?

It seems to basically come down to money, at the end of the day. While the race might not mean anything for the standings, there is a substantial purse. Rotowire tells us that about a million dollars was up for grabs. Around $200,000 of that will be distributed to the winner.

How Bad Was the Damage?

The race would start out with only 18 cars. Essentially, The Clash was designed to be a sort of warm-up heat to get the season rolling. What all was said and done, only five cars would be on the lead lap. Six total would be left in the race. The rest would be taken out with substantial damage.

Erik Jones was the man behind the wheel of the car that would take home victory. As we see in the Twitter post above, his car was nowhere near competitive condition for any normal race. However, I guess that this goes to show that sometimes it’s better to be lucky than good.