Superbird Original Paint / Unrestored With 674 Miles, Might Be The Closest Thing To A Mopar Time Capsule We’ve Ever Seen. 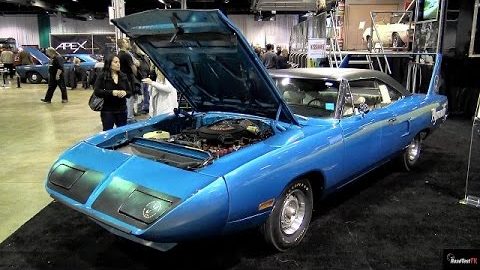 Collecting cars can be a labor of love. For those looking for monetary value, it can be a challenge to find. It’s really a toss-up as to which ones will become the most sought after. Try as hard as they may, many collectors have yet to make a science out of picking what’s going to be valuable. We would say that trading cars and collecting them is much less like the stock market and much more like heading to the casino. One can never truly know when a car is going to skyrocket in value or dive into the depths of the dump.

However, valuable or not, seeing a pristine example of an old school car that is unmolested in great condition is nothing short of a gearhead dream. This time, it just so happens that such a car would bring a good amount of loot should the owner sell. This one doesn’t appear to be available, though.

The Plymouth Superbird, of which there were less than 2000 made, is something that collectors are really seeking on the market these days. This particular example has 674 miles.

Now, finding a machine like this with that low mileage is rare in and of itself. What makes this thing even more incredible is that all of the original components are still there. Nothing has been touched. The machine has never even been repainted. Everything has maintained and is as close to looking like it rolled off the showroom floor as possible.

The video below showcases this incredible machine in all of its glory. A car like this is truly a once-in-a-lifetime example. We highly doubt that there are any other machines that are even in this ballpark. We would have to think that the vast majority of these cars were probably driven. Few are in this good of original condition. The ones that are in good shape likely have been restored in some capacity. For those who are looking for the raw and real deal, this is as close as it gets.

« Which Street Outlaws Have The Fastest Daily Drivers? They Put It To the Test To Find Out!