They Swapped an Outboard Boat Motor in a Car and it Worked!

They Swapped an Outboard Boat Motor in a Car and it Worked!

When it comes to the internet, we’ve learned to stop asking why. Instead, we ...

When it comes to the internet, we’ve learned to stop asking why. Instead, we just sit back, relax, and enjoy as basic engineering can build some crazy contraptions. I’ve always been a proponent of having more fun in cheap, ratty old cars than brand-new expensive ones.

Having owned both of the same time, there’s something freeing about a car that you really don’t care about. For example, if you’re just sitting around one day and have a stroke of genius to put a boat engine in it, there’s nothing stopping you. The worst thing that’s going to happen is you damage a car that costs a couple of hundred dollars. It’ll probably just blended with the rest of the dents anyway!

This time, the crew that is known for their crazy engine swapping antics is at it again. That’s right, Life OD, is putting their Honda Civic to use. This car might not be traditional and therefore, they decided that it needed a nontraditional powerplant as well.

The crew decided to take the most unconventional thing that they could find and stick it in the engine bay. This came in the form of an old Honda outboard. Conventionally, this idea is way too far-fetched to be practical. However, where there’s a will, there’s a way. These guys were all about getting to the bottom of it.

By following along with the video below, we see what might just be the craziest engine swap ever. For people who are constantly complaining about LSx and Coyote swaps being too common, we’d love to hear their opinion on this one.

In this demonstration, we actually get to see the boat engine powered car in motion! No matter how slow it’s moving, this is incredibly exciting. We would love to see them take it out on the public roads and get a reaction to the combination. 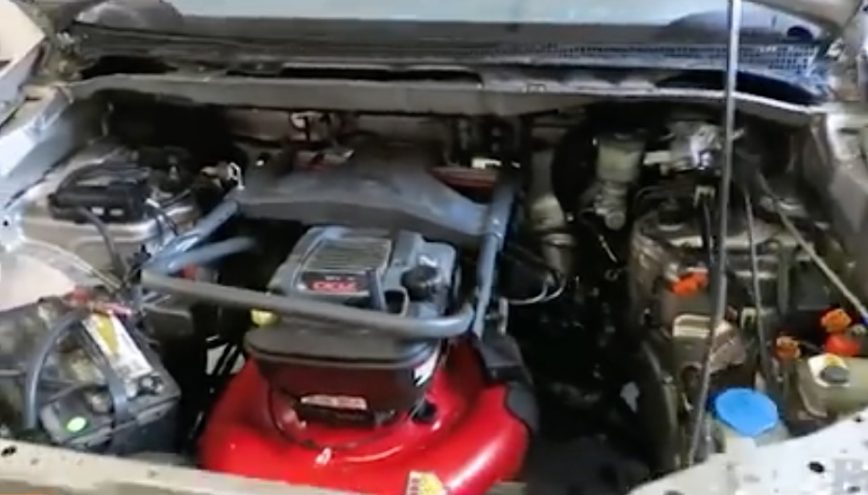