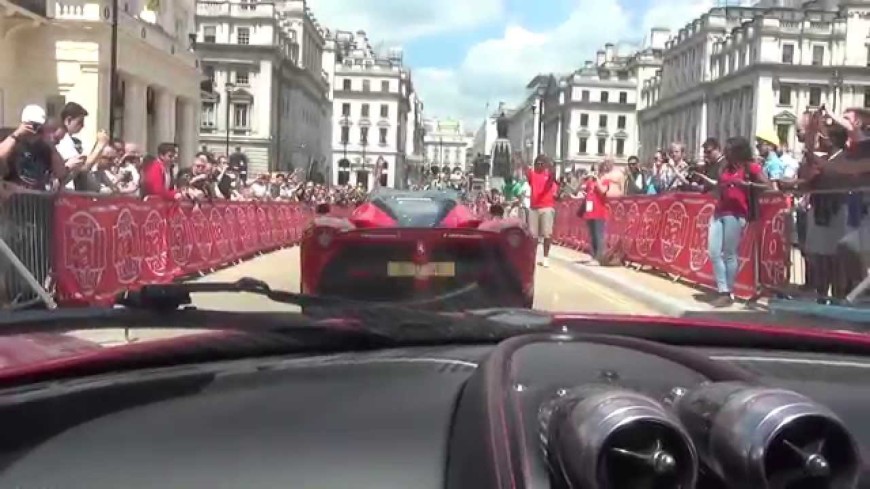 Can you imagine seeing these 2 on the streets?

During the Modball Rally, which started in London, featured some awesome cars from Joe Macari. This camera guy was offered to go out in the Pagani Huayra, and he could not refuse! The car is insanley fast and the maddest car this guy has ever been out in from what he says! Must be pretty awesome to be cruising with the LaFerrari!

Pagani Huayra Info – The Pagani Huayra is an Italian mid-engined sports car produced by Pagani. Succeeding the company’s previous offering, the Zonda, it costs ($1,300,000). It is named after Wayra Tata, which means “God of the winds” in Quechua, the official language of the Inca Empire. The Huayra was named “The Hypercar of the Year 2012” by Top Gear magazine and received a very positive review when tested by Richard Hammond on Top Gear. The Huayra is currently the fastest car to go around the Top Gear Test Track, setting a time of 1:13.8, beating the previous record of 1:15.1 set by the Ariel Atom V8 in January 2011.

The Pagani Huayra uses a seven-speed sequential gearbox and a single disc clutch. The choice not to use a dual-clutch in an oil bath was due to the increase in weight of over 70 kg (154 lb), thus negating any advantage of the faster gear changes in a double-clutch transmission. As a result, the entire transmission weighs 96 kg (212 lb).

The car is equipped with bespoke Brembo brake calipers, rotors and pads. The calipers have four pistons in front and four in the rear. The rotors are drilled carbon ceramic, 380 mm (15.0 in) in diameter and 34 mm (1.3 in) thick. There are also four independent flaps which can act as air brakes or produce downforce.