Party Boys On a Yacht Crash Their Dads Boat Into a Bridge!

Party Boys On a Yacht Crash Their Dads Boat Into a Bridge!

It’s hard to beat a boat for having a good time. Hitting the open water for some fun ...

It’s hard to beat a boat for having a good time. Hitting the open water for some fun in the sun, or fun under the stars, it a great way to spend as many days as possible. However, there are some things to take into account, like being able to properly and safely operate the vessel. I’ll say for the record, I don’t know what exactly happened to this small yacht to cause it to be seemingly adrift, left to the mercy of the wind, which is merciless on this particular night.

Footage caught by some fishermen casting from a highway bridge captures the incident in all its crushing glory as the yacht is slammed violently into the bridge supports at a substantial rate of speed, fast enough to visibly warp the vessel’s hull as it slams against the concrete pillars. It appears the boat is completely without power, which could be caused by a major failure on board or as simple as running out of gas, something I’m intimately familiar with, but that’s a story for another day.

These guys clearly don’t know what to do, or if anything can be done, as they just sort of wander around the boat with no obvious plan in place for getting the boat away from the bridge. If it is stuck there in the stiff wind and waves, the damage is going to get worse by the second, but the video ends before any obvious solution is figured out.

Hopefully the small boat that pulls up was able to offer some kind of assistance in getting the boat away from the bridge before the damage reached a point of the yacht sinking and leaving everybody on board swimming for shore. If anybody out there knows what happened, we would love to know how the boat came out of this ordeal and what happened to cause it. Hit us up in the comments and let us know! 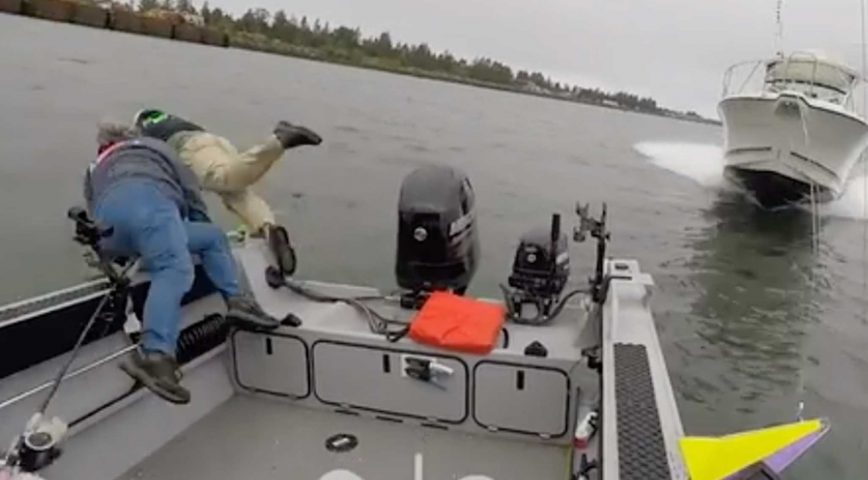