With the way the popularity and success are measured today, Dan Bilzerian is ...

With the way the popularity and success are measured today, Dan Bilzerian is basically a superhero. Once upon a time, the man who gathered his wealth playing poker made that wealth explode into fame online. Through Instagram and other means of social media, Dan would eventually grow to the point where he has almost become a household name. For the few among us who haven’t heard of Dan, these days, he can be found on the gram. He’s known for pushing the limits and posting up pretty much everything that most people wish they had in life. This can be guns, yachts, parties, and of course, the fine female company that he always seems to keep around. This is just to name a few examples of the subject matter on his page.

This time, we dig a little bit deeper look into one aspect of Bilzerian’s daily life. One of the areas where most guys would naturally go once they put together a good sum of money is the garage. After all, most of us, whether automotive aficionados or not, have a list of cars in our heads that we want to try out. As it turns out, for someone with Dan’s net worth, he’s able to try out some of those vehicles and more. Just like his social life, his car collection also appears to be a lot of fun. It even has some diversity thrown into the mix.

By following along with the clip below, we get to see everything from a Shelby Cobra to a Rolls Royce Cullinan. Yeah, that’s the most expensive SUV in the world.

It looks like he’s definitely put some thought into picking out the vehicles. When looking at the garage itself, we get to see more impressive features to fall in love with. Among some extravagant materials that the garage is built with, Dan even has his very own personal turntable. All of this is so he doesn’t have to turn the Shelby around in the garage. If you want to talk about a first world solution, that’s certainly at the top of the list. 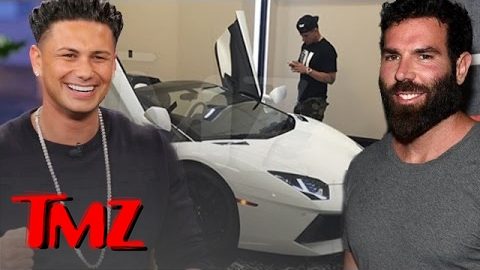