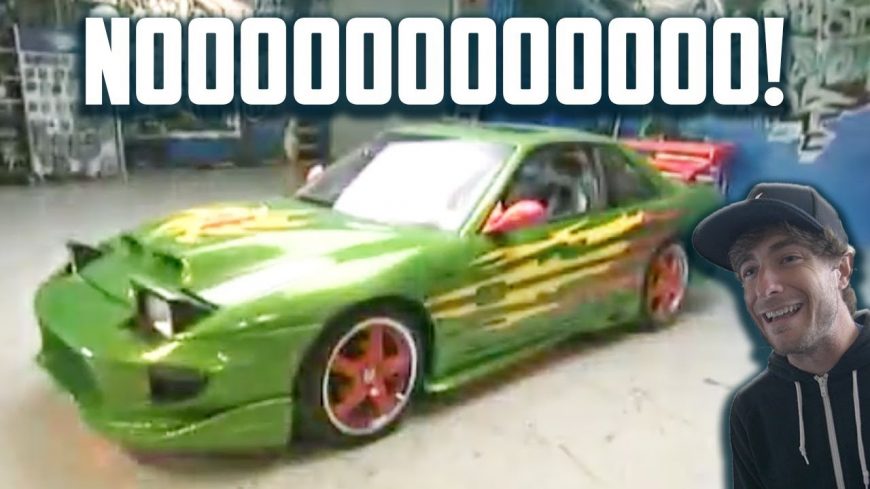 Pimp My Ride was an inexplicably popular television show that brought together desperate car owners with a team of customizers that took things to extremes to get the audience’s attention. Hosted by rapper Xzibit, the show managed to earn six seasons of production on MTV back in the mid-late 2000’s and actually had quite a large following despite the absolute absurdity of some of the modifications and accessories installed by the customizers.

David, the founder of the ThatDudeinBlue YouTube channel, has found that his subscribers enjoy him sitting down a reviewing some of the worst projects in the show’s run, and he has another one today the features the build that many of the show’s viewers considered to be the worst of the worst: The 240SX coupe. The car’s owner had taken the approach taken by many in the 240 community and pieced the car together as he went, leaving himself driving a cobbled-together heap with no real rhyme or reason that he could call a theme. What he did have, however, was a vision. The car’s owner had designed a 240 in Need For Speed that was his ideal representation of what he wanted from his car if he had the time and money to see it through to completion.

The guys at the shop decided to take that vision and do their best to bring it to life and the results are, being as nice about this as we can, comical bordering on absurd. The body kit is gaudy, the hood looks ridiculous and as David points out, the red wing looks horrible bolted on the green paint. The interior isn’t much better with some ill-fitting upholstery on the seats and racing harnesses that are bolted to the seat itself, which completely defeats the purpose of racing harnesses.

The truck-mounted entertainment system was the long shining point of the build with a great looking install featuring a high-end stereo and cleanly-installed television array connected to the trio of Xbox consoles.

The show would eventually end its run thanks to waning interest from the audience, which presumably outgrew the show and moved onto more age-appropriate sources of entertainment.