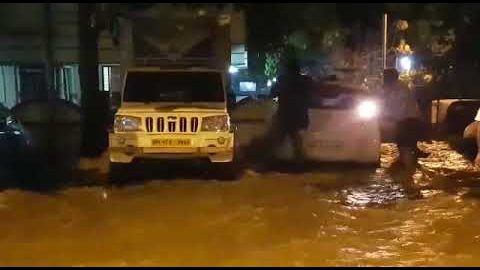 When everything is going smoothly, you never really take the time to think about the infrastructure beneath us. I’m sure that when it’s working on it on a regular basis, there’s really no reason to concern yourself with all that’s happening under the ground. However, when it’s not working properly, it can really be a cause for concern when some of those underground features start to cause havoc above ground. In this video, we get to see just that situation and it’s definitely no tamed beast as this might be one of the most extreme utility failures that we have come across and it was all captured on video.

What we see here is some major flooding thanks to a pipeline failure and because of that, water goes everywhere and people stand by waiting to see what’s going to happen next. This is when apparently the failure got a little bit bigger than anybody had ever bargained for as it exploded, sending water into the air and lifting an entire SUV up with it. It had to be an incredibly scary situation to be a part of and probably did its due diligence in totaling the SUV that was incorporated into the mishap.

If you follow along down in the video below, you get a first-hand perspective on the situation yourself that had to be quite the heartstopper for everybody who was nearby. When a situation like this pops up, it probably was new for just about everyone dealing with it and there’s not really a go-to plan on how you’re going to handle all of the adversity.

This is definitely one that we think you might to find yourself watching over and over again as well because we had to press the play button multiple times because we weren’t believing what we were seeing! To an extent, the situation almost seemed like a scene straight out of a movie.