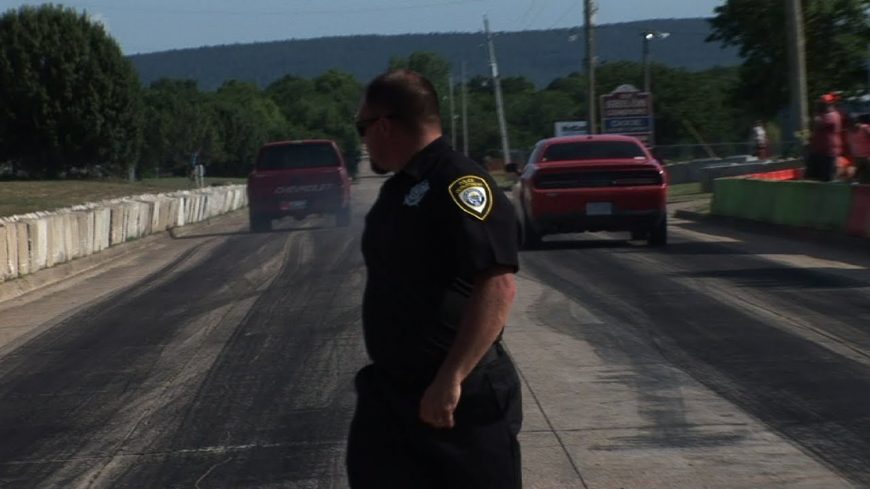 Normally, when you think about street racing and the police, the two just generally seem to not mix together too well. Obviously, street racing is illegal and the police will chase down this illegal activity and try and bring an end to it. However, in this situation, we see some different circumstances as police and street racing mixed together just like peanut butter and jelly in an exhibition that is a lot of fun to watch as tons of cars make their way down the street without having to worry about law enforcement or doing something that could end up going on their record along with the fines that generally accompany such a situation.

It isn’t just any type of normal street racing situation as this time we check out a street racing made safe event that attempts to take the concept of street racing and apply it to the situation where things won’t be as hectic and drivers don’t have to keep a constant eye out over their shoulder to make sure that the man isn’t watching.

Instead, law enforcement has a front-row seat here and, if anything, is even helping out to get off these races and make sure they go down without a hitch. It’s pretty wild to watch as a whole mashed up variety of cars would end up going down the street with a collection of entertaining races.

If you follow along down in the video below, you’ll be able to join in on the action for yourself, seeing what this sort of event is all about and how exactly things unfold to make for a pretty intense and completely legal adrenaline pump of a day with cars that range from racing machines to daily drivers and everything in between. There are definitely some good bouts to be had here!

« He Fixed His Boost Leak with a Monster Energy Drink Can! Could it Work?