Police Investigate After Officer Points Gun at Driver During a Race

Police Investigate After Officer Points Gun at Driver During a Race

The scene was quite hectic at a Bowman Gray Stadium race this past Saturday night, ...

The scene was quite hectic at a Bowman Gray Stadium race this past Saturday night, August 4th, at around 11 pm as chaos unfolded on the track, enough so that a police officer on the scent felt the need to point a gun at one of the drivers, Andy Spears. It was on the tail end of an event that would cite Spears the aggressor in an assault with a deadly weapon on another driver. It really seems like everything happened so quickly that you might have to check out the scene multiple times, as it was caught on video, before you can finally decipher what exactly was going on.

From the scene of the accident, you can see officers helping the disabled vehicle’s driver to get out of the car, at which point Spears whips around in his number 23 car and runs into the side of the other vehicle, bumping the car into its driver and the officers that were attempting to get him out of the vehicle at the time.

From the stands, it seemed like a case of nothing more than a little bit of pent-up aggression coming out at exactly the wrong time, creating a highly dangerous situation not only for both drivers but also for those who were simply attempting to help.

The video below takes you to the scene of the incident that night. The police report claims that “Unsure of the driver’s intentions, Officer C.K. Robertson perceived this action as a deadly threat to all aforementioned parties.” Sometimes, it is better to be safe than sorry and it’s really a shame that some people just have to take racing too far. Most of the time, things can be left out on the track but when they can’t and the aggression spreads outside of the race itself, sometimes, extreme measures have to be taken to make sure that everybody can be safe.

Guy With Serious Anger Issues Gets Pulled Over by Police 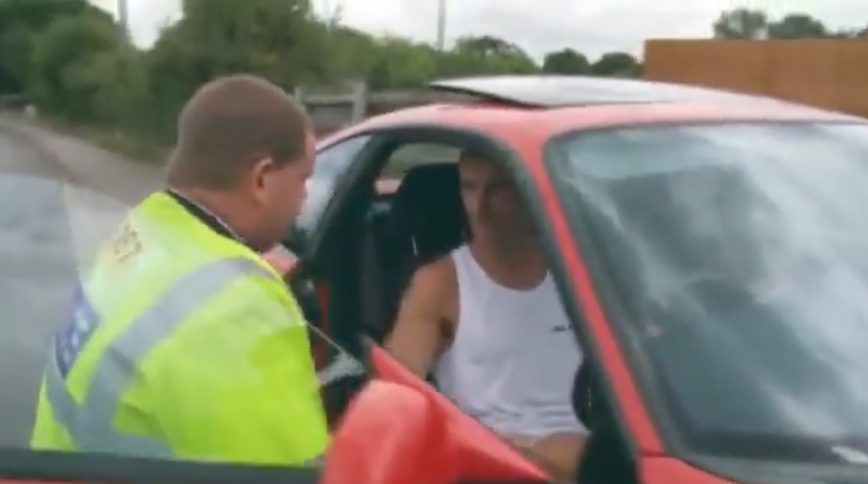