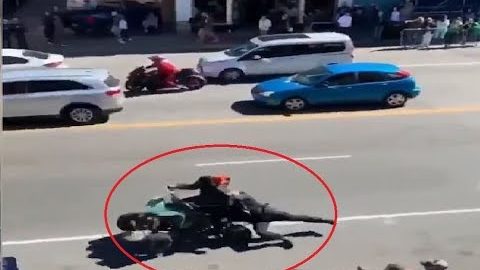 We have to warn you that this scene is a bit chilling. First thing is first that the officer pictured in the encounter with the off-road vehicle has since been released from Vanderbilt University Medical Center. Via the Tennessean, Special Events Sergeant John Bourque, a 22-year veteran, was the one pictured in the clip. The officer was treated for minor injuries before being released. The officer is now resting at home for some much deserved time off after the startling incident seemed to come from out of nowhere. That’s certainly something that nobody expects to unfold during their day.

During what looks to be a St. Partick’s Day celebration, a barrage of what police called over 100 off-road vehicles flooded the streets of Nashville. The officer was struck on what the heels of what those on the scene described as a variety of vehicles weaving in and out of traffic. It’s said that this isn’t the first time that the group has been a nuisance to the area. For those wondering what the big deal is, situations like this could happen to just about anyone. It just so happened that this one would occur with a police officer and be caught on camera. The damage done was minimal compared to what could’ve happened.

Sgt.John Bourque has been released from Vanderbilt and is resting at home. MNPD still working to identify the driver of the 4 wheeler who dragged him on Broadway. pic.twitter.com/JCa68KqsfC

The search is on for the man who was behind the handlebars of the ATV. The description from the scene says that the group ran into another vehicle before departing the area. The Tennessean tells us that anyone who has tips can report to Crime Stoppers at 615-743-7436. Tips submitted can stay anonymous. If they lead to an arrest, the tip may qualify for a cash reward. As of how the Nashville Metro police will move forward, via their Twitter, “A strategic plan is being developed in response to this.”