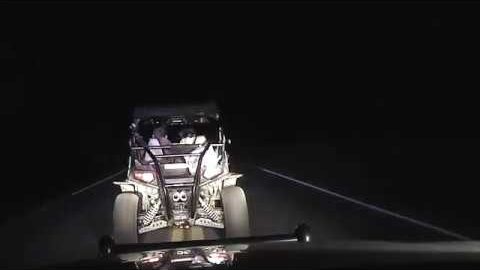 We have to say that there’s pretty much no situation where running away from the police is a good idea. More likely than not, for those who choose to try and evade, they’re going to get caught. Even if the police car right behind them doesn’t manage to keep up, if the cops really want to catch somebody, they have lots of tools and resources to nab the suspect. Sure, someone’s car or motorcycle might be fast but is it really faster than a helicopter or a whole collection of officers attached at the radio? Long story short, probably not.

Every once a while, though, obviously, we stumble upon someone who is willing to try it out. They’ll either have an insane amount of confidence in their ability to escape or have a sense of desperation. Something bad to hide is a major motivator for those who flee.

Most of the time, these folks end up getting caught. Sometimes they’ll even be tackled to the ground before being slapped in cuffs. For this individual, though, it looks like the driver has managed to put together enough of an evasive chain of movements that they would be able to get away with the help of their Polaris RZR.

Naturally, where such a vehicle would have the most advantage would be in very tight and probably off-road areas. The more rugged the terrain, we would think the better it would be for the Polaris. Therefore, the suspect puts this police car through all sorts of different obstacles as they attempt to escape. Before long, the RZR gets to a section of woods with lots of trees. The police cruiser certainly isn’t going to make it through here.

It’s a close call but the RZR is actually able to squeeze its way through a situation where it looks like it’s getting stuck. From there, it’s all about over as the driver continues on, making his way through the obstacles before evading the tail. As far as we know, police never managed to catch up with the driver.

« Farmers Are Now Using Tractor Flamethrowers On Their Crops, But Why?