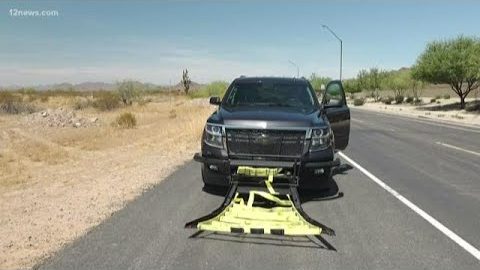 Depending on the jurisdiction, sometimes, police chases aren’t as simple as they seem. It’s not always “Put the pedal to the metal and go chase down the bad guy.” Unlike the person running away from the police, the cops themselves very much have to consider public safety in the matter as well.

If police put a full-force effort forward to chase down a bad guy, would it end well? Perhaps. However, chasing a likely untrained suspect through a crowded area could definitely be a formula for disaster, especially with someone desperate to escape. The collateral damage or risk thereof could definitely outweigh the need to catch this particular bad guy. Therefore, many jurisdictions have “No chase” laws where they are forced to simply let the bad guy get away in order to ensure public safety.

Needless to say, this is an issue.

While the police probably are in the right when abiding by these practices, that isn’t to say that we can’t look into technology to make things better. Therefore, there are a lot of people who are in the line of work that creates equipment to make law enforcement more efficient. If car chases could be wrapped up before they even got going, public safety wouldn’t even be a question to consider.

This time, we check out a pretty neat invention and how it was actually put in use in order to attempt to end car chases.

In this story, we follow along with a situation in which a woman was taken in a kidnapping. Her kidnappers apparently were looking for ransom. However, the police didn’t take any chances when it came to chasing down the vehicle. As the vehicle appeared to evade, they would break out a tool that goes by the name of “The grappler.” Hidden in plain sight on the front of a police car, the contraption would be put in place, as it was lowered down, and shot out a net. From there, it acts like a lasso of sorts, reeling in the vehicle in front instead of engaging in an all-out chase.

Down in the video below, we get to see a little bit more about how something like this works. It’s pretty neat to see a creation like this come to life from somebody’s mind. Thinking up an idea like this is one thing but seeing it through to the point where it can actually be helpful is another thing entirely!