Sometimes, when it comes to our deepest rooted wants, they seem to be pretty ...

Sometimes, when it comes to our deepest rooted wants, they seem to be pretty impossible but, with enough money, just about anything can be accomplished. When this customer went to HG Motorsports out in San Diego and told them that he basically wanted to drive a cup car on the streets, the shop would try to hook him up as best they could to accommodate the request that otherwise would be pretty illegal because a flat out race car isn’t exactly something that you’re allowed to pilot on public roads.

In this display, Matt Farah takes us along for a ride in a Porsche that has been brought up to spec to become the street legal cup car that the owner so desired to drive. After a body swap and a couple other key modifications, this 911 GT3 Would come to life as an all-motor monster that happens to be a ton of fun to drive in any circumstance. Even from this side of the screen, it looks like Matt is having an absolutely grand time behind the wheel of this car.

As he rows through the gears with the paddle shifters, Matt can’t stop talking about how great this 500 hp machine is, especially on the mountain road that he’s traveling on, giving that naturally aspirated setup all that it can handle. Because the car isn’t gasping for air with any kind of boost, the elevation changeIt is no problem for the slick ride as it glides through the mountains with ease.

Check out the video below that sits you shotgun and allows you t experience what such a car is all about as this owner spent his hard earned money to bring a race car to the streets, legally of course, and what he got is nothing short of something to write home about. In this situation, you have really got to see what this Porsche has to offer in order to believe it. I truly can’t think of a single racing enthusiast that I know who wouldn’t drool at the opportunity to get behind the wheel of a car like this.

Matt Farah Takes The 1955 Mercedes 300SL Gullwing For a Spin! 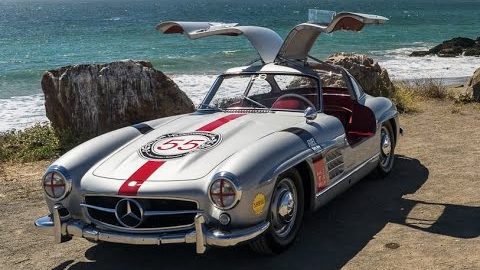