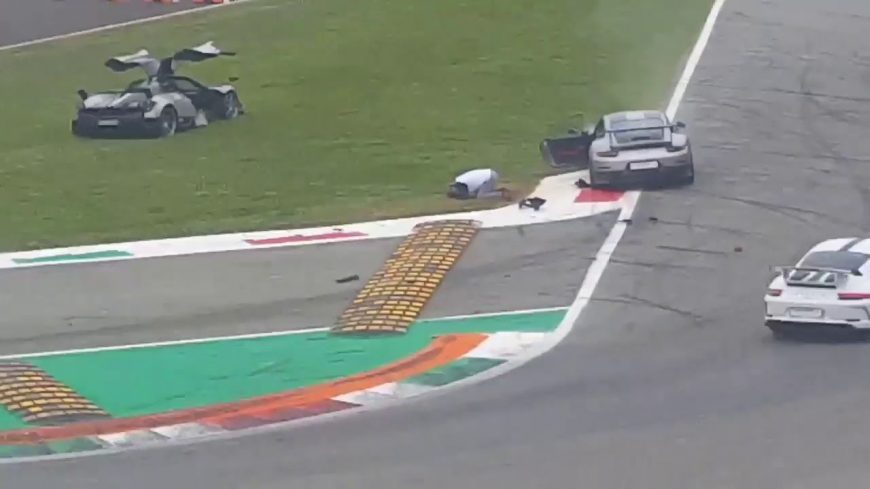 That’s the price of a Pagani Huayra BC like the one pictured in this video.

The other car is a Porsche GT2 RS that’s still expensive in its own right. Even at prices that approach $300,000, though, the Porsche is just a tenth as expensive as the Pagani.

Sometimes, when people buy cars like these they just get stored away in garages to the dismay of enthusiasts everywhere. However, after watching a situation like this where nearly $4 million in supercars were destroyed in less than a second, we can kind of begin to see why. Even though these cars have a performance heritage and were built to race, it takes a lot of guts to put a $300,000 car on a race track, let alone one that comes in with the $3.4 million price tag

It’s kind of hard to say what happened in this incident. However, what we can tell is that the driver behind the wheel of the Porsche really came into a corner a little bit too quickly. It would almost appear as if there were some sort of mechanical failure that disallowed him to stop as he was really moving as the Porsche approached the seven-figure hypercar.

After failing to stop, The Porsche would end up plowing straight into the Pagani, surely causing hundreds of thousands of dollars in damage if not more. Immediately following the incident, the driver of the Porsche would fall onto the ground in the fetal position and we can’t say that we necessarily blame him. We would probably cringe up and try to disappear inside of our own bodies as well.

From what we understand of the situation, neither driver was injured. However, there may be some minor bruises left on some egos here. There isn’t a ton of information surrounding the incident. We would be left to assume that these drivers had to have some sort of racing insurance on these cars, though. Right?