Four car enthusiasts, when it comes to modification, nothing is safe. As gearheads, ...

Four car enthusiasts, when it comes to modification, nothing is safe. As gearheads, with enough time to think about a particular platform, we could come up with a lot of crazy ideas. It doesn’t matter if it’s a Ford Fairmont driven by grandma or an old pickup truck. We’ve seen just about everything hot rodded.

One vehicle that really seems to come out of the left field when it comes to performance modification is the Volkswagen bus. In this particular video, though, we get the opportunity to see somebody who had a vision and carried it out. With a starting point as a Volkswagen T1 van, we see some major modification invested and quite the endpoint.

Straight off of the bat, we’re told that it has “a couple of extra cylinders” which made us curious. It turns out that this means that the van is Porsche powered and the intensity meter has been cranked up just a little bit. In addition, we see some key fabrication that makes the machine safe to drive. We’re sure that it stiffens it up just a little bit as well so that it can take turns better.

Is this one, we get to watch the bus as it takes on the ultimate test. This old school hippie van is taking on none other than the Nürburgring. The track has been known as being one of the most challenging that gives drivers of a variety of different obstacles to overcome.

For those who might have been wondering how such a vehicle would perform on the ring, dial into the video below. This time, we get to ride along in the cabin of the souped-up VW bus. I guess that we’ve seen weirder things go fast. We have to admit that we kinda like this thing, though! It really has some character to it.

VW Camper Van Shocks Everyone on the Race Track 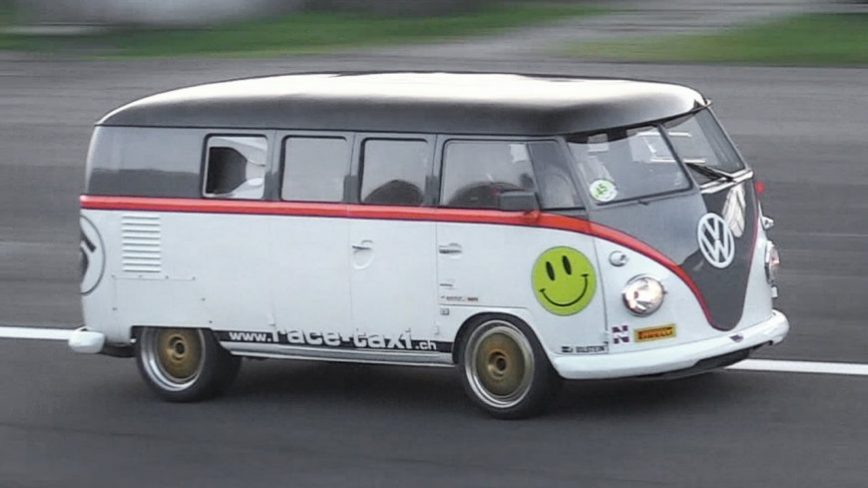