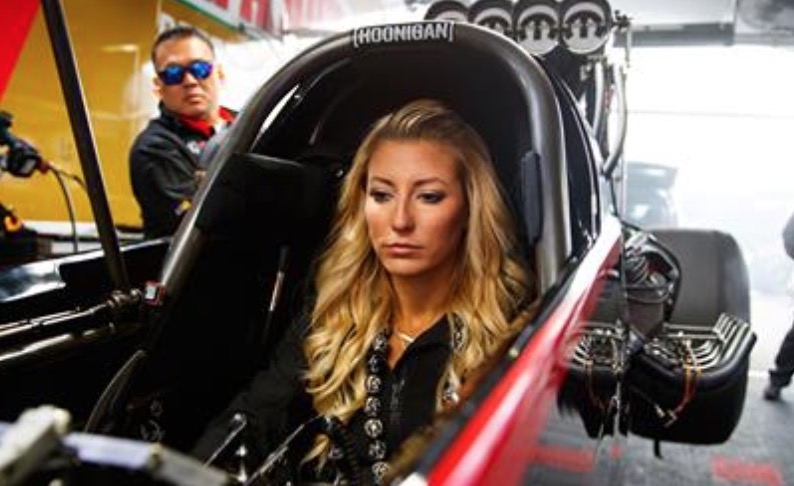 Hot off her triumph at the NHRA’s most recent stop in Atlanta, Team Speed Society Racing’s own Leah Pritchett and her crew will roll into Topeka, Kansas for the Menard’s NHRA Heartland Nationals carrying something they’ve been missing all season: momentum. After struggling to find consistency early in the season, Pritchett’s Fireade-sponsored Don Schumacher Racing dragster laid down a string of killer runs in Atlanta, returning the team to the form that found them leading the points for the first half of the 2017 season.

The Atlanta win moved Leah to 5th in the season points standings, and she hopes to continue to gain on current leader Steve Torrence. Her car will carry the Schumacher Electric colors for the weekend. “If anything, (winning Atlanta) just let us know what we already knew- that we’re capable of doing it. There’s a bit of confidence instilled in us, but our actions aren’t going to be any different,” said Leah on the team’s mentality rolling into Topeka, a track known for producing spectacular numbers when the conditions are right. 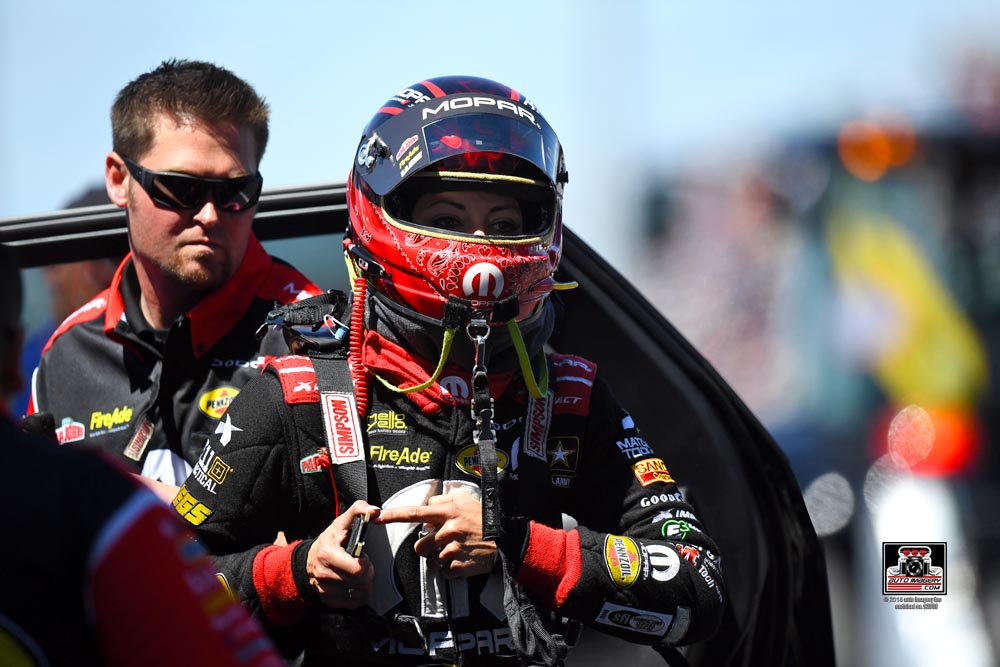 Pritchett’s DSR top fuel teammate Antron Brown is the most recent Topeka champ, taking his first Kansas win last year. When asked about returning to Heartland Park, Brown said, “Topeka is one of those tracks where we always run well. It’s a throw-down track. The track is probably the smoothest track we go to – period. You can go fast and you can hit it hard.” Brown enters Topeka just behind Leah in the 6th points position. His dragster will once again be flying the Matco Tools for the Cause colors benefitting Fisher House Foundation.

One spot ahead of Leah in the points chase stands Clay Millican, who will also be rocking a new look for the weekend as Strutmasters has come back on board as Millican’s primary sponsor. The Strutmasters colors proved to be good luck for Clay last year as he won his first ever NHRA national event while the suspension company was emblazoned on the side of his dragster at Bristol, so Millican is hopeful lightning will strike twice. “Gonna be a hot weekend with some big temps but probably some low numbers with a run under the lights tonight. We’ve been to the finals here before, losing to Larry Dixon, so we’re hoping to take that last big step and bring home another win.”

DSR funny car driver Ron Capps also claimed the title here in 2017 and looks to return to the winner’s circle after also lacking consistency in the early part of the season. “It’s a place that I’ve been able to win at several times, and I’ve always had a soft spot in my heart for Topeka because I got to race both Top Fuel and Funny Car there. Anytime we see Topeka on the schedule, you can bet it’s going to be great side-by-side racing for our fans and, depending on weather conditions, Topeka always shows that it can hold world record runs.” After winning eight races in 2017, Capps has yet to hoist a Wally this season, but his team has put up solid numbers, they just need to put the pieces together to lay down a string of solid runs. 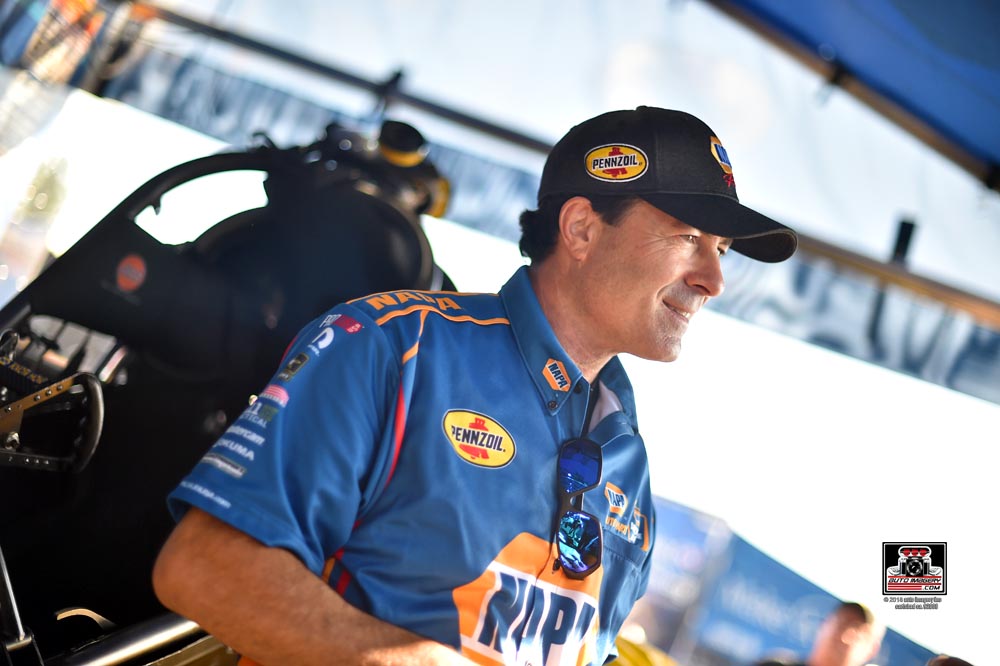 The same can be said for Jonnie Lindberg, who has also shown flashes of brilliance thus far in 2018, but has yet to find the consistency needed to win his first national event as a professional driver. Lindberg will return to the vibrant multi-colored Head Racing look Toyota Camry this weekend and hopes to find the consistency needed to go rounds, as he’s fallen out of the Top 10 in points. The Head Racing team has shown they perform well in the heat, racing to back-to-back runner up finishes in Gainesville and Vegas last year, so if the temps in Topeka soar, so could Lindberg & Co.

Alex Laughlin’s 2018 Pro Stock Camaro will be also be rocking a new look for the weekend as Fitzgerald USA has come on board as his primary sponsor. Fitzgerald, as you may recall, built Alex’s gorgeous semi transporter and has become much more involved in the sport, even singing on as the event sponsor for the tour’s stop in Bristol, TN. “While this is technically the first race of season to be partnered with Fitzgerald USA, I’ve been working with them for the last 8 months. From PR events to fly fishing trips, these guys have already proven to me that they’re some genuinely some of the best people I could ask to work with,” said Alex of his partners. “Not just that, but they build an amazing product too. Our 389 Peterbilt that rolled out of their Tennessee plant hasn’t just been a head turner, but a flawless piece of vital machinery that we push all over the country. I’m entirely enthused to be part of their brand and hope to be able to send a Wally to their showroom and headquarters this year.” Laughlin has had a competitive car all season but had a string of foul starts ruin his chances early at several events. Last weekend he lost by inches to reigning NHRA champion Bo Butner, showing that when he keeps the light green he can run with the best in the class.

As always, we encourage our fans to watch the action on Fox Sports, as they bring the action straight into your homes in stunning high definition. The schedule for the weekend will be as follows: hour-long qualifying updates will air on Friday at 10:30 pm ET and Sunday at 1:00 pm ET, then eliminations will air from 2:00-5:00 pm Sunday. We wish all of our drivers the best of luck and can’t wait to see how everybody fares in the midwest this weekend!

Who should you keep an eye on at this weekend’s #HeartlandNats? The #NHRAonFOX crew has the inside scoop in this week’s #NHRAToday Roundtable delivered by Papa John's Pizza.