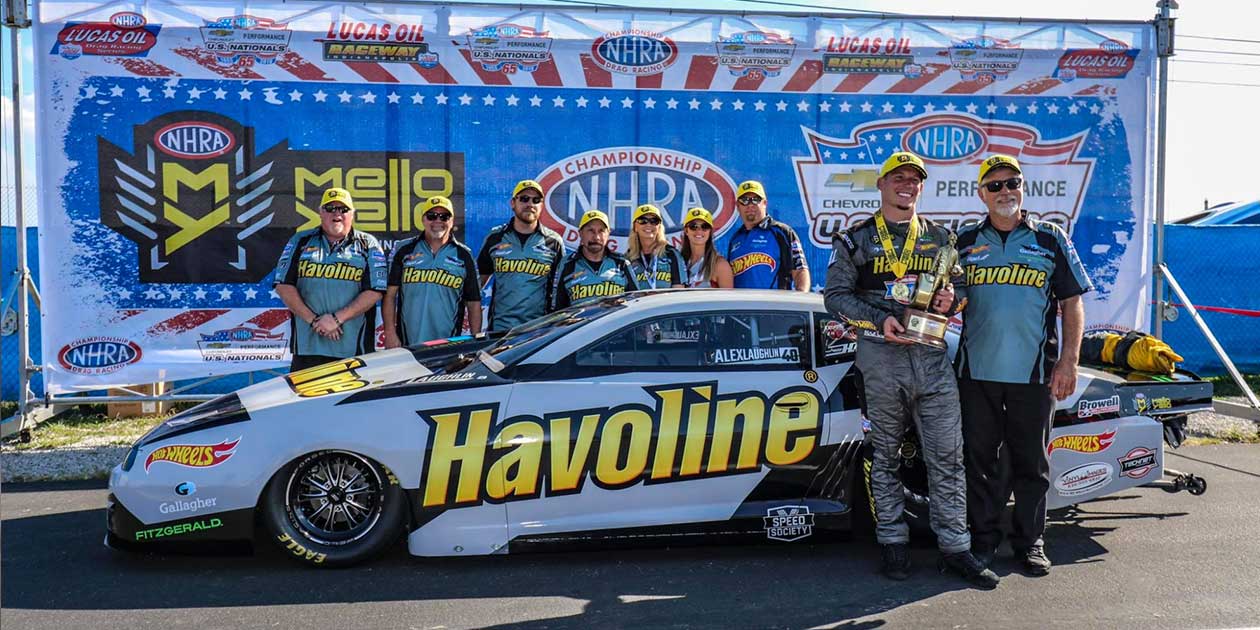 In fact, it seems as if, according to Laughlin, that season-long efforts are thrown out the window when it really matters. In order to convey his feelings on the matter, Alex wrote a guest editorial on the matter. This is what he has to say.

Laughlin said to Speed Society, “The NHRA season stretches from early February to late November each year. We spend our life-on-the-road chasing a dream to become an NHRA Champion. For some, it comes easier than others; but for others, it’s all about timing and capitalizing on it.

The series consists of 24 National Events from coast to coast, to coast… and every other direction. Of those 24 events, Pro Stock is featured at 18 of them. The points series is pretty straightforward; Win a round, gain 20 points. Be a top qualifier for each session in qualifying, gain more points. We call the qualifying points “bonus” or “baby” points. As I said, it’s pretty straightforward. What could make more sense than to throw something in the mix to really complicate things; a wildcard, joker, or total points reset before we start the real chase for the championship. Here’s where I’ll use my right and freedom of speech to I’ll explain what a Crock of Malarky it is… in my own “opinion” of course…

You see, we spend the first 12 races: Approximately 60 days and nights on the road, about 720 hours (daylight hours at the track) making the best performance calls, battling weather, fighting traffic in and out of the track, and doing the best we can to do just that; THE BEST WE CAN. What’s crazy to me is, why? After the 12th race, which is always the US Nationals in Indy, the points reset. From there, we have 6 “Countdown Races” or “Playoffs”.

The points don’t completely reset to all 0’s after race #12 but it sure is close to that.”

Alex continues to tell us about an example in his personal experience in the Countdown to the Championship.

“We ran the first 12 races with a ton of success, won about 4X more rounds than we lost, we almost could do no wrong it seemed. We went to more semi-finals than anything, made 4 final round appearances, and then won Indy, the US Nationals! Completing Indy, I had let the clutch out in more rounds of competition than any other driver in the category, 86 times to be exact. We battled back and forth between 2nd and 3rd in points all season long and missed entering the Countdown in the lead by only TWO points, it was a breakout season and we were headed for the Championship. Well, then points reset… So though I missed the lead by 2 points, after the reset I was down 20. Here’s what each position gets:

At 20 points per round of competition you win, it sure doesn’t take a lot to get from 5th to 1st, in fact, just 2 rounds and a few qualifying points. Compare it to NASCAR and there was a caution with 10 laps to go so the rest of the field caught back up within literal inches of each other. Except for the NHRA, it’s like this every single season.

I can get down and agree that there should or could be a points reset, but I won’t agree that it should only be the difference in 5 rounds (points-wise) from 1st to 10th place. My argument in this is: What’s the point in competing, putting ourselves, our families, the hustle for sponsorships and funding through all of the first 12 races just to have our knees chopped out from under us after Indy? What’s the incentive to go through all of that when in reality, I can work less, stress less, spend more time at home, and just hit 6 or 7 of the first 12 races to claim my spot in the top 10, then just race the countdown hard and shoot for the championship?

Heck, it’d sure allow me to go to more radial races anyway… But realistically, times are different these days. We don’t have 30+ entries in each category. In fact, in a full field of 16 cars in each “Pro Category”, barely more than half of them are on the same level of competition. Top Fuel, Funny Car, and Pro Stock each only have 8 to 10 full time, A-team, competitive cars. Qualify in the top half and you just about have a freebie for 1st round of eliminations on Sunday.

Don’t be confused about my motive for this article, it isn’t with spiteful intentions. My whole life all I ever wanted to do was drive a Pro Stock Car, even just once. I can’t afford to do this stuff without my great sponsors, but I stretch each dollar and far as possible to make it. Each year I work harder and harder to come up with creative solutions to generate the funding to do this. Sleepless nights, traveling all over the country and I still barely have two nickels to rub together at the end of the season. I think it’s time to reevaluate the whole “Countdown”, how the points reset, and what they reset to. Otherwise, it’s easier for everyone else to skip several of the first 12 races, save some money, and then just run the last 6 for the Countdown to the Championship, but that isn’t good for the sport because car counts are diminishing already.

At the end of the day, I may not have all the answers, I may not even have any of the answers. But I will say, it’s about to be the year 2020 and we better start visualizing it that way.”

« Ford Ranger Rolls Over at Spectator Drags… Those Rims Though!