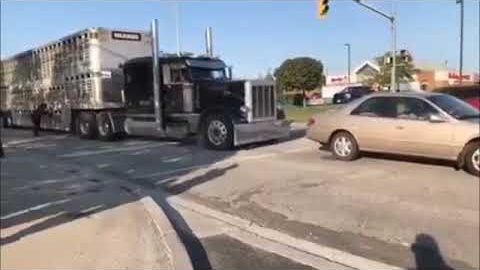 It seems like we’re really in a day and age where everybody is protesting just about everything. Now, we’re not here to stand in between you and your version of justice but sometimes, protests don’t really make much sense. For example, getting in the way of people who are operating a motor vehicle by positioning yourself in traffic probably isn’t the best way to go about protesting. Not only is it dangerous for you but it can inhibit people from getting to work and being on their way in the case of emergencies. Getting outsiders tied up in your cause who have no stake in the matter probably isn’t exactly productive, either.

This time, we check out a group of protesters who seem to be out there fighting for animal rights. However, it doesn’t really look like the way that they go about doing it is exactly effective as they attempt to block a driver who has animals onboard. However, the driver of the semi truck is not about to the stop for the protesters as he plows straight on through the group of people who were looking to stop the truck. From there, they continue on to remark about how crazy this guy is. Yeah, that’s right, people who literally stood in traffic to attempt to prevent moving vehicles from keeping on their path are calling somebody else crazy.

For some reason, it appears as if somebody associated with the group ended up uploading the video to the internet and it can be seen down below. As we previously mentioned, we aren’t here to try and convince you one way or the other but we have to give a hats-off to this driver who wouldn’t slow down for people who thought that the most appropriate way of protesting was standing in the middle of traffic. I guess that common sense isn’t so common, after all.