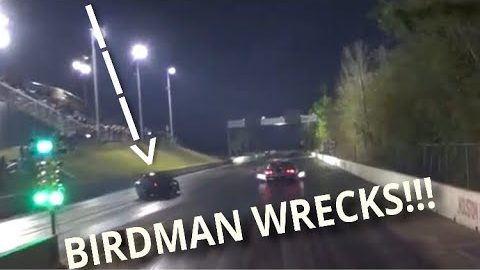 Parachutes is important. I feel like there should be a sticker made stressing the importance of making sure the chutes on any given race car are going to work when called upon to slow the car after a pass.
While the majority of the time, things go according to plan: the driver hits the lever or the button to launch the chutes, and a split second later they “pop”, working as an airbrake to slow the car to a safe speed before turning off the track. However, there are certainly plenty of times when the only step that gets completed is the pushing or pulling of the lever or button.
As you might imagine, it’s not a pleasant feeling when you expect to feel the car drive into the chutes and nothing happens.

Even with world-class brakes, which many drag cars do have, some track’s just don’t have sufficient space within which to stop, which is exactly what happened to no prep icon James Finney in his Birdman Trans Am at Houston Motorsports Park.
Lined up alongside the nitrous-huffing Camaro that’s carrying the cameras for this video, Birdman lays down a solid pass, taking the win after driving around the other car right at the finish line. It’s no secret that turbocharged cars run big mile per hour, so Finney was trucking through the traps when his chutes failed to deploy.
You can see the swoopy Trans Am speeding toward the worst possible outcome: a series of barrels that mark the end of the track and a dusty sand trap beyond. Finney slams through the barrels and into the sand, with the car finally coming to rest quite a ways beyond the end of the track itself.
Finney was able to walk away, thankfully, but the car did suffer some damage from striking the barrels. If we know anything about Finney and his crew, though, it’s that they’ll have the car patched up and be back in action in no time, so look for Birdman to be on the track within the next couple of weeks.