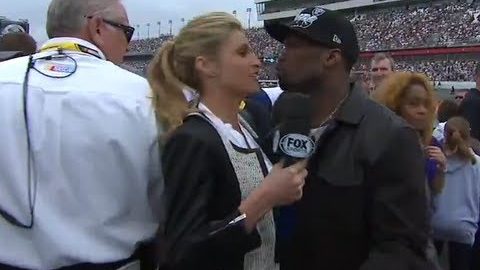 Rapper turned entrepreneur 50 Cent has been known to have a little fun with his fellow celebrities and the press from time to time. From public disagreements with several other musicians to his longstanding verbal feud with boxing powerhouse Floyd Mayweather, Fifty has managed to keep a positive reputation because his jabs are sharp, but humorous.

That humor serves him well in allowing him to pull stunts like this one as well, where he marched up to FOX Sports anchor Erin Andrews and tried his best to plant a kiss on her! Andrews avoided the smooch and tried to maintain her composure, but was clearly thrown off her game by the move. As you can see in the photos and the video, Andrews was not expecting the kiss, while it seems Fifty may have had the plan in mind already.

Bless Erin’s heart and thank God for guys like 50 Cent who keep it light and fun! Something tells us we haven’t seen the end of these two on camera together! Hopefully next time Erin is a little better prepared for Fifty’s “advances”