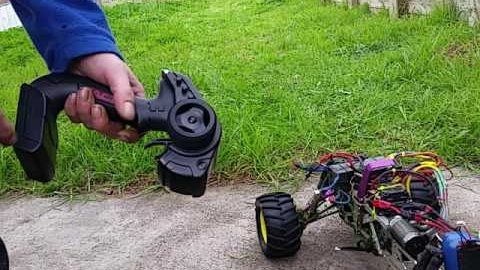 When it comes to taking care of your house, there are certain things that we wish we didn’t have to do. These kinds of chores would probably be better off done by somebody else but because that kind of thinking gets rather expensive, we head out to do them ourselves anyway. One of these tasks just so happens to be cutting the lawn. Sure, it’s not that much of a hassle but dedicating time to it every weekend during the summer most certainly isn’t something that people would enjoy doing most of the time. We’re sure that you can find lots of other ways that you would like to spend your free time instead of being behind the lawnmower.

In this one, we tune into a situation where someone has decided to forgo the process of manually mowing the lawn entirely. No, we aren’t talking about one of those self-propelled lawnmowers or a ride on, but instead, a unique creation that brings in all new level of simplicity to cutting the grass. As the title implies, this individual has taken it upon themselves to turn one of their remote control cars into a lawn mowing beast. This thing really ends up being a ton of fun to watch, too. It might’ve been a lot easier to just go out there and cut the grass himself but we just have to admire the guy’s creativity in the matter.

Follow along in the clip down below that shows you the remote control mower as it comes to life. Sure, this might not exactly be the most efficient way to we have ever seen of one cutting the grass and it might take a little bit longer but heck, you can turn the task that that might have been seen as a chore at one point in time into a fun time. I know that I could probably get lost out there, having a blast cutting the lawn with a remote control car while sitting on the back porch. After seeing what this thing is capable of, be sure to tell us what you think of the remote control lawnmower.