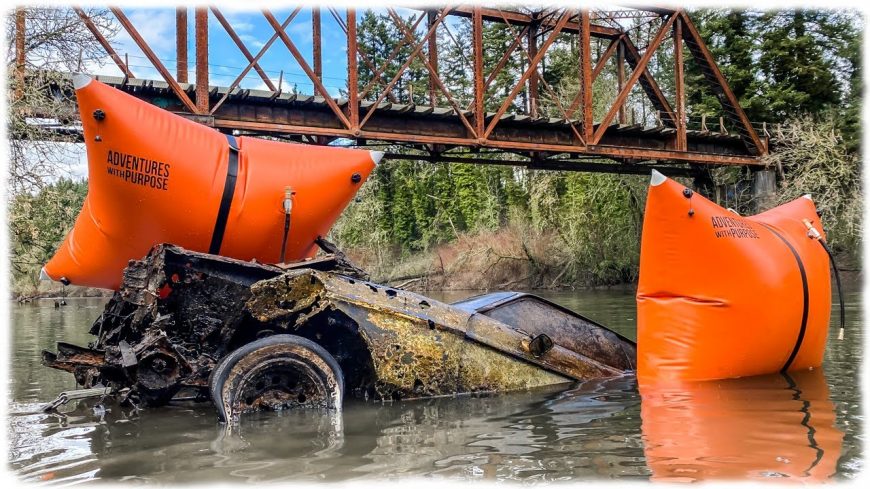 Sorry about the brief ramble. However, I have to say that tuning into the Adventures with Purpose YouTube channel is something that one can easily get lost in.

It’s pretty incredible to watch as all sorts of lost treasures are recovered from beneath the surface of the water. Even more interesting than the vehicles and other possessions that are recovered, sometimes, is the story behind them. One of the important parts to remember is that every single item recovered has that story behind it. There was a day, after all, where cars like the feature here were rolling around on the streets.

In this one, the vehicle in question is also quite a head-turner. The car is none other than in 1973 Ford Mustang Mach 1. For many fans of the Mustang, they’d probably admit that this is one that they would stop to take a look at when visiting a car show. This particular example, though, isn’t exactly in showroom condition.

Instead, what we find here is the result of a tip from a retired getaway driver. Based on this tip, the driver told Adventures with Purpose about a specific spot in a Portland River where they might just find a couple of cars. Needless to say, this one was certainly a pleasure to watch come to the surface once again. These guys never know quite what they’re going to come across and we would venture to say that this one was a pleasant surprise.

By following along with the video below, we get to watch the intricate process come to life. With all of the force of the water on top of the vehicle, it’s not as simple as just snatching it out. Instead, focused expertise really comes in to play with bringing the car up. When it does make it to the surface, this Stang proves to be quite the time capsule.

« How Much Does it Cost to Build a Contending No Prep Kings Car?