The Fast & The Furious has reached out and touched so many car fans over the ...

The Fast & The Furious has reached out and touched so many car fans over the years that we would be shocked if there were very many automotive enthusiasts who haven’t seen at least one film. In fact, they have become such a big part of car culture that we frequently catch ourselves quoting one-liners from the movies every now and then.

People have even been so passionate about the FNF universe that they have gone on to create some pretty crazy content on YouTube about the films. Sometimes, this content is more serious and other times, perhaps we find a parody like this one.

This time, we tune in with quite a laugh as Ginger Billy brings us a redneck version of one of our favorite films.

Naturally, the cars have been one of the biggest draws from the Fast & Furious films over the years. There are some serious dream machines that have really found their way into the hearts of those who have absorbed every last film. This time, though, we check out a redneck-ified rendition of a Fast & Furious scene that definitely had us laughing and in stitches.

Down in the video below, we check in with what might be the ultimate redneck Fast & Furious machine. In addition to seeing the car creatively fit it into the final scene from the first movie, we also get the complete tour to see exactly what makes this fast and furious rig “Fancy & Furious.”

We aren’t necessarily sure that this machine is going to make it to the silver screen anytime soon. However, we have to admit that we found ourselves smiling throughout and we think that any Fast and Furious fan would find themselves doing the same. We were especially impressed by the hood scoop hand crafted from the finest lawnmower cowl.

The "Ron Beer" Might be the Most Ingenious Lawnmower Ever Built 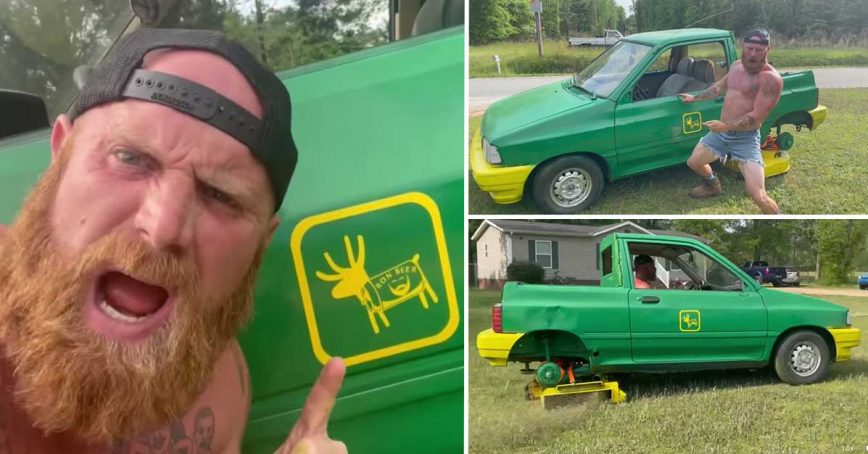