Redneck Tug of War Goes Horribly Wrong And A Guy Gets Hit By a Truck!

Redneck Tug of War Goes Horribly Wrong And A Guy Gets Hit By a Truck!

You know, we’ve seen a lot of crazy tug of war videos, but we can honestly say that, ...

You know, we’ve seen a lot of crazy tug of war videos, but we can honestly say that, at least as of today, this is the craziest one we’ve ever seen! Just when you think the action can’t get any crazier, this one takes a turn at the end that M. Night Shyamalan – Hollywood’s plot twist king – himself would be proud of.

Things start out with what seems to be a stalemate between an older Silverado and a Nissan Titan, not exactly the two most common tug of way competitors for sure. However, after a few tense moments of neither truck being able to take an advantage, the Chevy finally gets rolling and pulls the Titan down the street to take a decisive win.

However, the Titan’s driver isn’t ready to throw in the towel just yet and returns the favor by dragging the Silverado right back to where they started, tying up the score at one win a piece. However, that’s when the action goes from good to absolutely WTF!

The Titan’s driver jumps out of the truck for whatever reason, walking to the rear of his truck. The driver of the Chevy, it seems, is ready to get started with the tiebreaker round right away, dropping the hammer while the Titan driver is still outside his ride, which it looks like he forgot to put in park. The Chevy drags the Titan easily since it’s basically a trailer at this point, pull the black Nissan into and almost over it’s own driver.

As the camera guy begins reacting to what’s taking place, the guy behind the wheel of the Silverado hits the brakes and the Titan rolls smack into the back bumper of the Chevy, bringing the action to a crunching halt.

The driver of the Nissan looks to be okay, hopping back to his feet and, surprisingly, he doesn’t even seem to be mad about the situation, obviously understanding the other driver simply couldn’t see him before mashing the throttle again. Now that’s some crazy stuff! 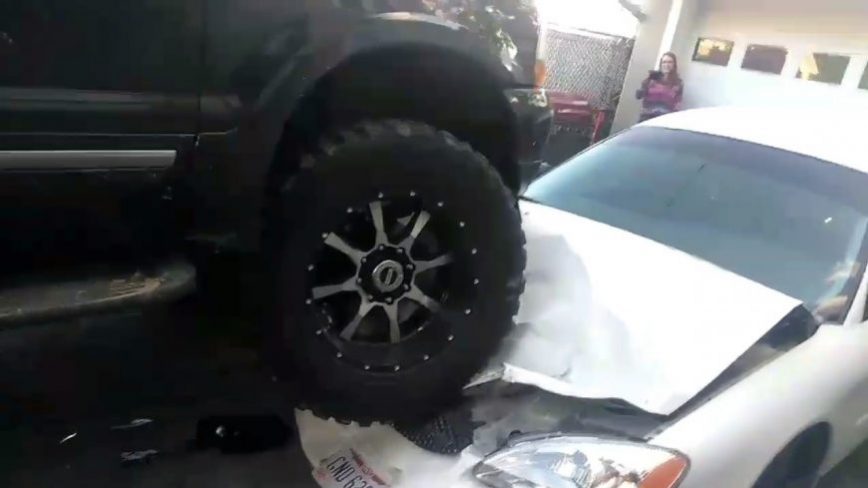