Even for those who don’t find themselves interested in fishing, there are a ...

Even for those who don’t find themselves interested in fishing, there are a plethora of videos on the web that can’t help but reel you in. For example, there is a whole selection of you on YouTube where debates unfold over whether or not somebody can go fishing in a specific area. At first, this might not sound that appealing. However, when we started digging into them, people get really furious. Obviously, the confrontation is just too juicy not to watch.

This time, we check-in with such a situation as things escalate in a hurry. Honestly, the way that this one was handled is almost enough to make our blood boil. We aren’t sure that there are very many situations where the correct course of action is what we see here.

Apparently the gentleman, and me use that term loosely, in the small jon boat weren’t too happy about the people fishing in this particular marina. For some reason, we highly doubt that they have the authority to kick the fishermen out of said marina. In fact, we highly question if they’re even familiar enough with the law to know when someone is trespassing. I digress, though.

However, that wouldn’t stop them from viciously attacking the boat of the fisherman floating around the area. In the midst of a conversation, this one escalated to a game of bumper boats rather quickly. In a highly dangerous maneuver, the man in control of the jon boat apparently decided that his best course of action was ram into the side of the other vessel. Not only did he do this once but decided to take part in the action several times.

We have to give it to the guys in the camera boat. These two really did manage to maintain their cool. Had they been more reactive and violent, this one could’ve gotten incredibly ugly. Unfortunately, we have no kind of news on how this conflict would eventually be resolved. Hopefully, the police weren’t too far away.

The Best of Diesel Trucks vs Protestors Gets Ugly 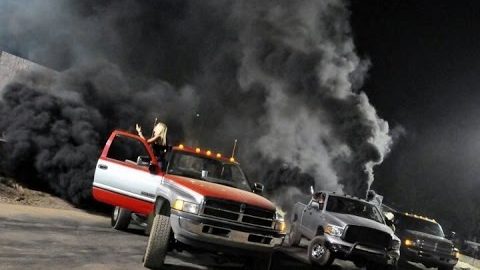