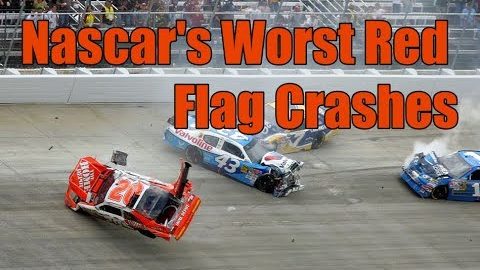 During the course of a NASCAR race, we truly never know what’s going to happen. After all, that’s why they race. However, we aren’t just talking about not knowing who the winner is going to be. Instead, we also have to address the fact that sometimes, some really dangerous crashes unfold during the course of a race.

Normally, when a crash happens out on the track, a yellow flag is thrown until they can get it cleaned up. During a yellow flag, racers will continue to make slow laps around the track behind the pace car. However, every once in a while, the magnitude of the accident in question simply goes beyond the need for a yellow flag. At this point, race officials will throw out the red flag, indicating that everybody needs to come to a stop while they clean up the mess.

Naturally, with these sorts of incidents, the carnage is typically much worse. The red flag will allow safety crews to really make sure that the surface of the track is cleaned up and that they can get the carcasses of the wrecked cars out of the way.

This time, thanks to KKB YouTube channel, we were able to dial ourselves in with some of the worst red flag crashes in NASCAR history. Some of these crashes are downright brutal as things just went wrong. While sometimes, human error is to blame, other times, mechanical failures might get in the way of a clean race.

Some of these incidents are sure to go down as the nastiest in NASCAR history. In the course of a race, we can truly never know when the big one is going to unfold. I guess that from a driver’s perspective, all that one can do is hope that they can make it out to the other side of the carnage.