We’ve seen all kinds of videos lately of people acting downright foolish when their ...

We’ve seen all kinds of videos lately of people acting downright foolish when their vehicle is being towed, and we have another one for you today! This one isn’t quite as insane as the one we shared the other day, where an angry owner fought to yank his Ford pickup off the hook and ended up literally destroying the bed, but it’s still pretty intense.

Featuring yet another Ford pickup, this owner decides instead of trying to drive away from the hook, he’s just going to drop his F150 into reverse and slam back into the repo driver’s boom. We can only make assumptions as to why the driver would do this, since there’s no clear obvious reason. The most logical reason would be that he was hoping to break the boom and have his truck drop back onto the ground, where he could drive away and avoid having it towed, at least for the time being.

When he realized that didn’t work, he seems to throw in the towel pretty quickly, opting to switch off the ignition and leave the repo man to do his work in relative peace. The guy videoing the incident, most likely doing so in order to have evidence should something like this happen, casually mentions that the truck’s owner is “going to jail” after his stunt, which provokes a few back-and-forth comments, but things remain relatively calm, if a bit tense, for the duration of the video.

We see the repo driver pull the truck out into the road and stop, most likely to reposition the truck on the hook and make sure it’s secured for transport, since the owner’s jostling may have left it unsettled. I do not envy those who do repo work for a living, and I hate to see somebody unable to make payments losing their ride, because it’s awfully hard to go to work and catch up on the payments if you don’t have wheels. However, the repo man is just doing his job as well, and sometimes this is just the way things play out. 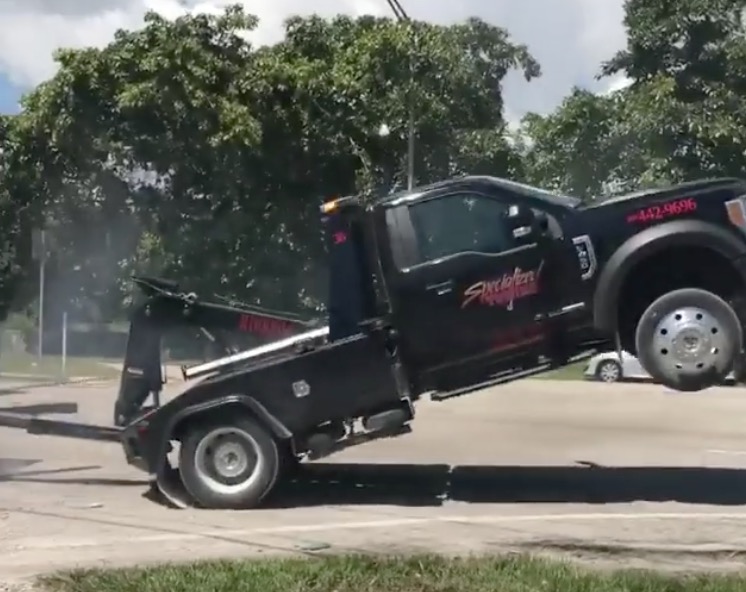