Ride Along With Street Outlaws DOC In The Street Beast!

Ride Along With Street Outlaws DOC In The Street Beast!

If you’ve ever wondered what goes on inside the Street Beast Monte Carlo while ...

If you’ve ever wondered what goes on inside the Street Beast Monte Carlo while Doc is making a pass, we have a great look at exactly that. Street Outlaws star and 405 Top 10 competitor Doc regularly makes appearances at tracks all over the country, usually with fellow Street Outlaws star Monza and his Sinister Split Bumper Camaro. The two travel together and put on a great show since their cars are fairly evenly matched.

In the video below, we get a great look at Doc himself as he goes through the entire process of making a run. Firing the car in the staging lanes, you can hear the monster nitrous-huffing engine roar to life. Doc gives everything a once-over, then drops the transmission into gear and rolls into the burnout box, where he lights up the rear tires to make sure they’re nice and sticky, hopefully providing him as much traction as possible for the run. After backing slowly into the fresh rubber he’s just laid down, Doc purges the nitrous to make sure the bottle pressure is exactly where it needs to be before beginning the staging process. He carefully bumps into the staging beams, then launches hard, the crowd visibly becoming a blur outside his driver’s side window as he blasts to what was surely a slow four-second eighth mile pass. Up top, he rolls out of the throttle and gets on the brakes to bring the ride to a safe end, making the turn off at the top and heading back to the pits area.

It’s always so cool to get these inside looks at what drivers do in the car, and not just the ones from the show. Different classes and different style cars require different processes and this is a great angle to learn from, as you can see everything the driver is doing from the moment he first fires up the car until he turns off the track onto the return road. 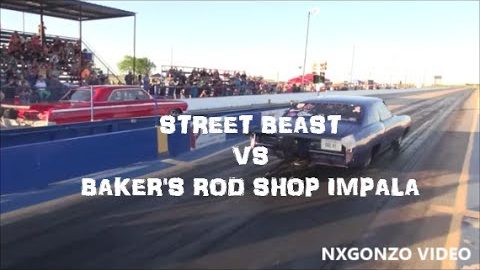