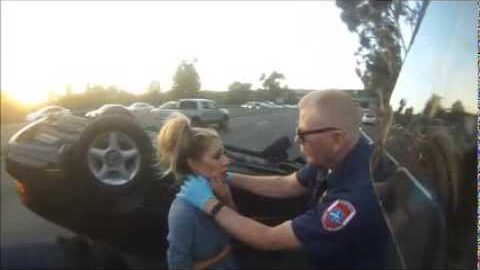 In today’s sea of negative news and people trying to bash one another at every turn, it’s rather refreshing to see someone take a little bit of time out of their day to stop what it is that they are doing in order to lend a helping hand to someone that really appears to need it.

This time, we ride along with a helmet mounted GoPro camera that captures the action as this rider is heading home from work on the San Diego 163 northbound when he comes across a car that happens to be overturned in traffic.

In a series of motions that look almost instinctual, the rider pulls over, hops off of his motorcycle, and runs over to the car to see if there is anything that he can do to help out in a situation that has probably completely destroyed somebody’s day if not more. Luckily, it turns out that the rider had exactly the tools needed to help the job out as he pulls out his knife and helps to cut the seatbelt from the girl onboard so that she can get out of the car.

We’re able to watch in the video below as this good Samaritan does a deed that is rather simple but somebody probably immensely appreciates. We give this guy one giant thumbs-up for being on the lookout for his fellow human being who ended up being ok. Perhaps more of us should take notes from this fine example.