Rider Scares The Crap Out Of Distracted Driver in Traffic

Rider Scares The Crap Out Of Distracted Driver in Traffic

We all know how dangerous it is, but many of us still do it every day. It’s become ...

We all know how dangerous it is, but many of us still do it every day. It’s become one of the leading causes of accidents in the nation, and is considered every bit as dangerous as driving while intoxicated, but so many of us are quick to pick up our phones while we’re solely responsible for two tons of metal hurtling down the road at speed, even if traffic dictates that speed slow to a crawl.

Our fearless camera-wearing biker isn’t exactly following all of the rules of the road either, weaving from lane to lane and splitting lanes between cars as well, but at least he is in full control of his ride ever step of the way. You can see the driver of the drop top BMW nearly jump out of his skin when the rider blips the throttle and lets his bike handle his talking for him.

We have to implore you guys to please put your phone down while you’re behind the wheel. I promise you, I know as well as anybody how tempting it is to think “I got this”, because you just glance away for a split second here and there. However, those split seconds can turn into full seconds, then several seconds and longer, time when your full attention should be on the road, not on whatever message or photo you just received.

The last thing we want to see or hear is one of our fans has gotten hurt or killed, or has hurt or killed another motorist or innocent bystander because they were looking at their phone instead of the road. You can even make it official by taking a pledge to leave your phone out of sight while you’re driving with most mobile phone companies on their websites. Of course, no pledge means anything if you aren’t going to stick to it, so maybe just make a pledge right now between you and I not to let your phone distract you while you’re behind the wheel?

Guy Scares The CRAP Out Of His Mom In A Brand New Viper! 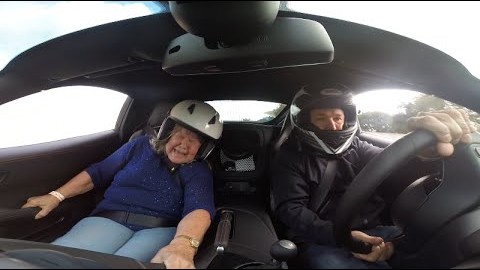