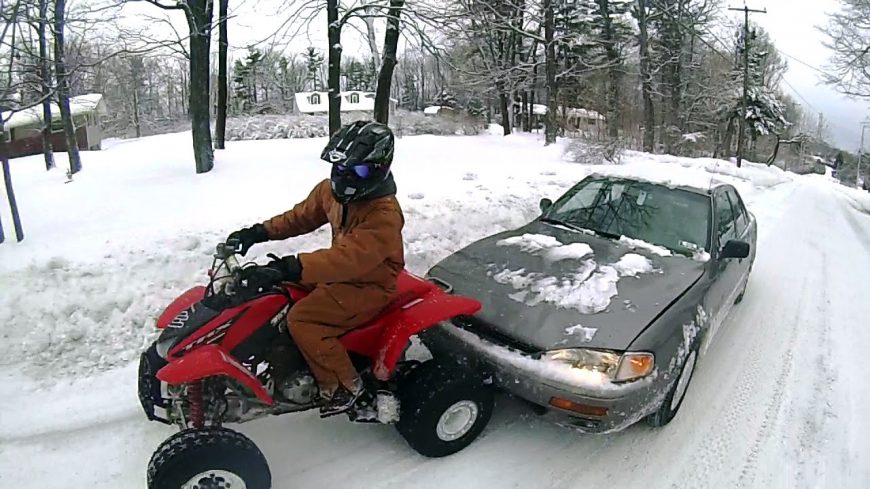 Well folks, it’s Monday, and what better way to start another work week than with a look at what happens when somebody is not hugged enough as a kid.

When your hometown is blitzed with snow, breaking out the ATV’s is a rite of passage and for some people, a much softer and more reliable way to get from place to place. However, other people see these rides as more of a hindrance than anything, and apparently some people even seen them as targets.

This video captures one such motorist taking things just a little too far by letting his road rage get the better of him to the point of actually bumping into the rear of one of the quads. As you’ll see in the video, the driver doesn’t just haul off and run the quad and it’s rider over, but that hardly excuses this behavior as acceptable. Instead, the driver of the car just eases up behind the ATV and sort of nudges him, with the knobby tires of the quad making a distinct buzzing sound against the plastic front bumper of the car.

The rider promptly moves out of the way, possibly avoiding a much more serious situation had his tire grabbed the front of the car and locked up or any number of other possibilities, but the rider with the camera is having none of this intimidating behavior. He speeds up, putting a sizable gap between his quad and the car, then slows as he tries to catch the driver on video.

However, the driver will have none of that and covers his face as he drives by. Hopefully the rider was able to get his license plate number and have the situation handled properly. With pretty solid video evidence, it would be hard not to see at least a citation being issued for this type of behavior.

« 35 Years After a Hoarder Passes Away, His Abandoned Classic Cars Remain