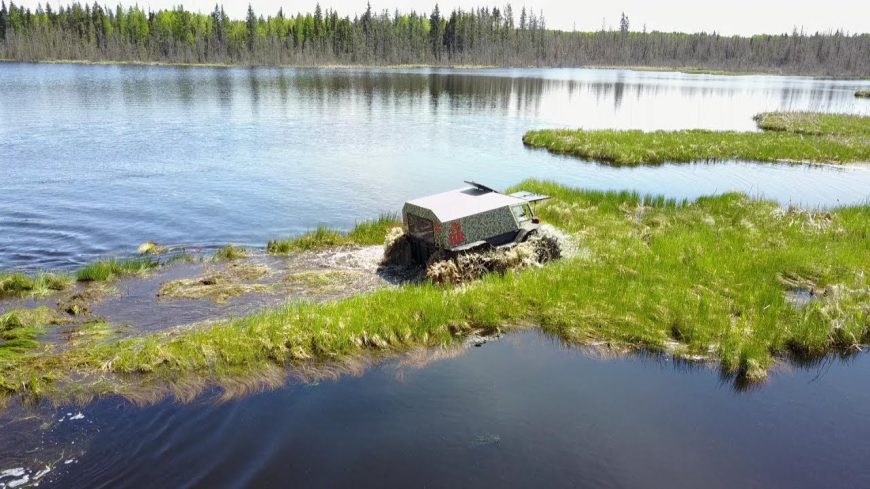 In everyday life, unless you’re somebody who has pretty much unlimited money to throw around, our vehicles have to have some sort of practicality behind them. Even if you do have a toy vehicle, you need somewhere to store it, plenty of money to upkeep it, and a nice timeframe to use it.

However, if you’re ready and willing to take all practicality and throw it out the window, you might be able to get yourself behind the wheel of the most versatile machine to ever touch tire to ground. this thing is so awesome that you might just have to realign your goals to include it in your long-term plan because this thing pretty much will be able to do whatever it is that you want to throw at it when it comes to ground transportation.

In this one, we take a ride along with ostacruiser as he takes us for a little bit of a spin in an all-terrain machine that’s known as “The Sherp.” Essentially, this beastly little nugget of a vehicle takes the liberty of plowing its way through just about anything that you could ever want it to and more! In this one, we get to check out a demonstration that really stretches out the legs on this crazy set of wheels, showing us exactly what it’s capable of as it conquers snow, ice, and even a little bit of mud. At this rate, it doesn’t look like there’s anything that the mini monster can’t achieve!

If you follow along with the video below, you’ll be able to sit right up front to get the best possible seat to view the action as the Sherp goes to war with the elements, managing to come out on top! Not only is this thing probably one of the most versatile vehicles that you could come up with when it comes to pounding your way through the elements but it also looks like one heck of a lot of fun that you can get behind the wheel of and have an absolute blast with.