On the drag strip, on any given day, it can be easy to find different types of cars ...

On the drag strip, on any given day, it can be easy to find different types of cars going fast. What do we mean by this? Well, if one were to look across the landscape, it’s kind of hard to tell sometimes which vehicles are going to stand out from the pack. The fastest of the bunch might all be finished drag cars that look like they’re unstoppable. On the opposite end of the spectrum, though, it might be the rusty old Chevrolet Nova that packs a punch heavier than most other cars on the premises. This time, we’re certainly looking at the latter. Not to sound biased, but these kinds of cars might just be my personal favorite!

With a track filled with the Chevrolet Corvette and Ford Mustang, the common spectator might not be so afraid that an old Nova with a nice little patina on it would pose much of a threat. However, that’s exactly what the owner wants you to think! It seems like Paul Beasley has come up with the perfect amount of rust too lull competitors into a drowsy state, just enough to blow by them and bring it home with the heavy hitter. As fate would have it, underneath that exterior are a collection of parts that collaborate just right so this thing is able to blast down the dragstrip to the tune of 1300 hp or so.

Watch below as we learn about the 427 cubic inch small block powered beast that’s fitted with a 72mm Precision turbo. Paul also mentions that the car has no aversions to being able to get down the street as well if need be. Long story short, for those who aren’t really sure, maybe they should take a second look at the competition before getting their confidence get the best of them. For us, this isn’t a combination that we would want to run into in a dark alley because more often than not, it’s probably going to grab that win.

It Looks Like a Rusty 4-Door Nova, But Has Magic Under the Hood 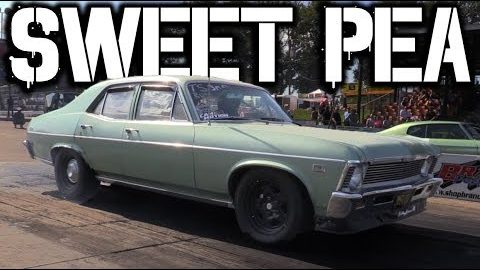