RZR Rider Sends It… A Little Too Hard!

RZR Rider Sends It… A Little Too Hard!

We’ve said it before, and it’s proven itself time and again: sometimes it just takes ...

We’ve said it before, and it’s proven itself time and again: sometimes it just takes a few seconds to tell a story. As far as I can remember, this is the shortest video we’ve shared, but holy crap does this clip pack a punch in it’s 9 second duration.

Side by sides, also known as UTVs, have become one of the most explosive niches in all of motorsports. These insane rides are equal part four wheeler and Jeep, making them popular for a number of reasons, not the least of which is the fact that they’re durable and fun, a combination that leads to things like, well… this!

The rider behind the wheel of this Polaris RZR decides he’s going to make damn sure he makes it to the top of this hill, so he gets a running start and hits the steep slope with a pretty good head of steam and powers straight up the hill, carrying more than enough speed to clear the climb.

The only problem is, he also has more than enough speed to carry the RZR past the break at the top of the hill, sending it flying several feet into the air above the top of the crest. While this UTV, like most vehicles under that heading, has a nice cushy suspension, those long travel shocks can do little to help with the absorption of the impromptu flight when the wheels aren’t the first things to return to earth.

No, this flight didn’t end with a nice, soft landing atop the tires, but instead the ride rotated in the air and sent the RZR crashing back to earth nose-first. This is obviously not the ideal landing orientation, and things only get worse as it continues to roll over onto its lid before coming to a rest like a massive four wheel drive turtle. Luckily the roll cage looks to have held up to the abuse and protected the riders, though the video ends before we can verify that they weren’t injured.

Do you think you can cram more of a story into 9 seconds or less? If so, show us what you got and we just may share your footage as well! 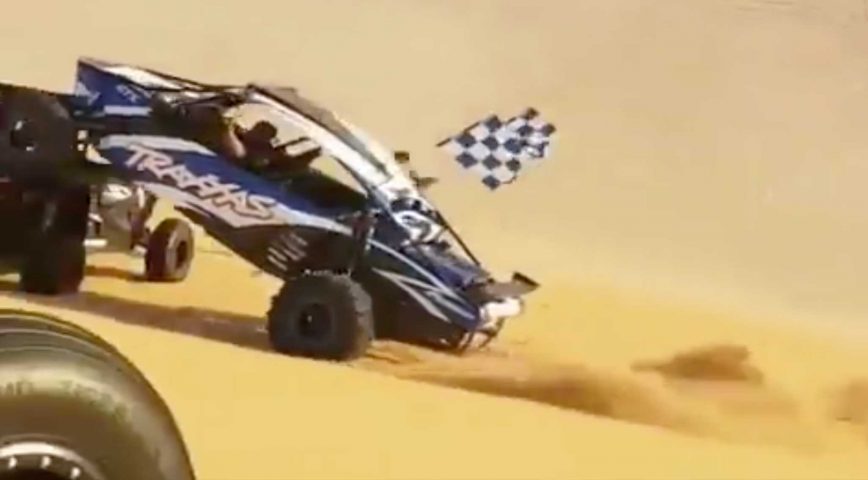